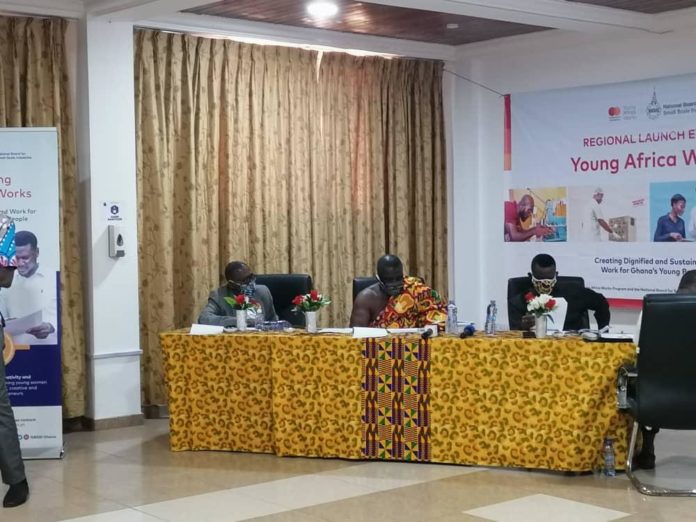 The National Board for Small Scale Industries(NBSSI) in partnership with the MasterCard Foundation has launched the Young Africa Works Project in Takoradi.

The project, which falls under the NBSSI’s Youth Entrepreneurship and Employment Programme(YEEP), aims to create employment and income generation opportunities for about 39,000 young men and women.

In a speech read on her behalf, Mrs Kosi Yankey-Ayeh, the Executive Director of NBSSI, reiterated government’s commitment to the agenda of providing Ghanaian youth with decent, dignified and sustainable jobs as enshrined in the United Nations Sustainable Development Goals(SDG’s).

She said the Young Africa Works project, which would run for three-years, would create 39,000 decent jobs for Ghanaian young people such as Young graduates, out of school youth, school dropouts and women-owned and led micro, small and medium enterprises (MSMEs).

Mrs Yankey-Ayeh said the launch of the project in nine regions so far was to introduce the project to the relevant stakeholders and make them beneficiaries of intervention training such as Innovation, Creativity and Entrepreneurship (ICE), Apprenticeship to Entrepreneurship (A2E) and MSME Business Acceleration which are the three respective areas the project is focused on.

She said a national launch would soon be held to officially announce full-scale take-off of the Young Africa Works Partnership between the NBSSI and the MasterCard Foundation.

The Western Regional Minister, Mr Kwabena Okyere Darko-Mensah speaking on the theme for the occasion, “Creating Dignified and sustainable Work For Ghana’s Young People”, pointed out that young people were an important asset to the labour market, since they represented 57% of the total population and therefore a significant driver of the national economy.

He said there was the need to promote and develop Micro, Small and Medium scale enterprises(MSMEs) to revamp the economy after the adverse effect of COVID-19.

Mr Darko-Mensah noted that youth unemployment had the potential to create social repercussions if overlooked and that it was imperative to invest in decent job creation and training opportunities for the young people to help them contribute to a more prosperous and stable society.

He outlined key government flagship initiatives such as the Nation Builders Corps, Planting for Food and Jobs, One District, One Factory(1D1F), among others as steps taken by the government to reduce the rate of unemployment among the youth.

The Regional Minister lauded the initiative saying, many of the youth have a blueprint of what they want to venture into but ” Financial and technical oil to fuel their plans is what is lacking and that the Young Africa Works project is the perfect start to aid young ones to become productive”.

He encouraged the youth to be agents of change and advocates of sustainable development in the society, charging them to be creative and business-minded to effectively venture into different profitable enterprises to make significant contributions to a Ghana Beyond Aid.

The Paramount Chief of the Essikado Traditional Area, Nana Kobina Nketsiah V, who presided said, the future of the country depended on the youth and that the Young Africa Works Project was one of the major programmes to bring about change in the country.

He, therefore, advised the youth to take the programme seriously stressing that, “failure to do that will waste the future of Ghana and Africa as a whole.

The Western Regional Director for NBSSI, Mr Yeboah Mantey encouraged the youth to embrace the project, especially the female population, to have more women-owned and led businesses.

Mr. Mantey outlined the implementation process for the Young Africa Works to include sensitization, enrollment, selection, assessment and training as well as support.

He indicated that a pilot test of the project was ongoing in Sekondi, Takoradi, Shama and Amenfi East and urged interested persons to visit the respective NBSSI offices to register for the Programme.

Madam Nana Yaa Amponsah, the Regional Project coordinator for NBSSI, also advised the youth and women to take advantage of the present opportunity to be financially independent.

The MasterCard Foundation and National Board for Small scale industries Young Africa Works Partnership is an entrepreneurship development and employment programme targeted at young people, particularly women in Ghana.