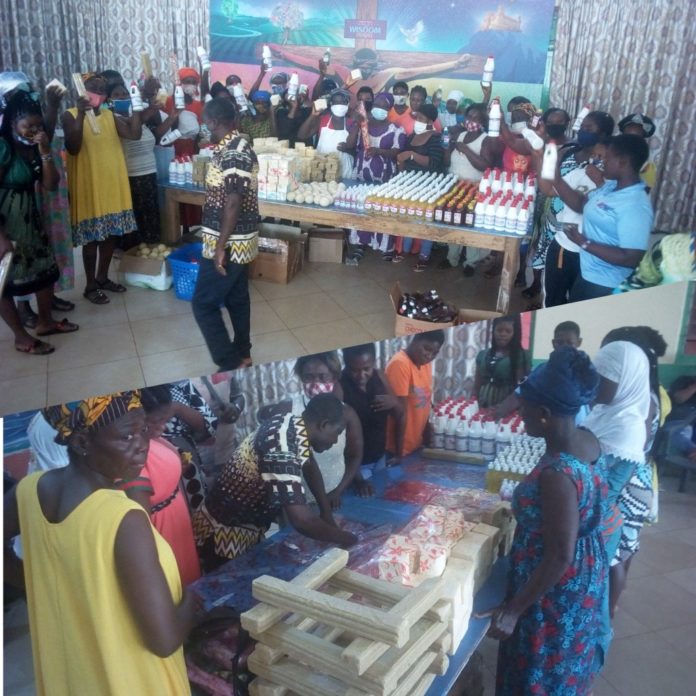 The National Board for Small Scale Industries (NBSSI) in collaboration with the Mastercard Foundation has offered employable skills training to 80 young people in the Sunyani and Sunyani West Municipalities.

The beneficiaries who were taking through soap making, antiseptics, and hand sanitizer production during the 14-day intensive training, supported by the office of the Second Lady, Mrs Samira Bawumia, were provided with start-up kits to establish their businesses.

They comprised school dropouts, teenage and single parents, widows, and other marginalised groups.

According to the NBSSI, the training formed part of the government’s efforts to create jobs for the teeming unemployed youth to make them national assets.

In an interview with the Ghana News Agency (GNA), Mr. Nuhu Salifu Dimah, the Bono Regional Public Relations Officer of NBSSI said the training was in line with the “NBSSI/Mastercard Foundation Young Africa Works SANBIZ Project” under the “Apprenticeship to Entrepreneurship (A2E)” component.

He explained the project aimed at providing employment opportunities for young men and women to get decent jobs.

The project also provided other artisan works such as carpentry, masonry, straightening and welding, and auto mechanics.

Mr. Anthony Akolbire, the Bono Regional Manager of the NBSSI noted the training would help to alleviate the plight of the beneficiaries.

Madam Joyce Tabuaa, a beneficiary and single parent from Kwatire in the Sunyani West Municipality thanked the NBSSI and its partners for the training which had empowered her to engage in viable economic activity to fend for her family.