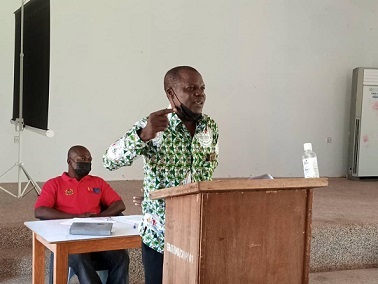 Mr John Yibile, the Deputy Upper West Regional Director of the National Commission for Civic Education (NCCE), has observed that the Islamist fundamentalists operating in the Sahel region and along the borders of Ghana is a threat to the country.

He said any likely spillover of their activities in terms of influencing, mobilizing, and recruiting the youth would result in transnational organised crimes and terrorist networks, which would take advantage of the porous borders and the proliferation of small arms and light weapons to disturb the peace of the nation.

He noted that to fight violent extremism and terrorism effectively and secure the type of future desired to harness the potential of the state for the necessary progress, the youth of the country were required to take the bold step needed to redeem the peace, unity, and stability entrusted to the country 29 years ago.

That, he said, must start with a free flow of information through awareness creation for the citizens to understand the issue of terrorism and violent extremism and explore and employ peace building mechanisms to be empowered to develop measures to counter radicalism.

Mr Isaac Tadoh, the Wa Municipal Director of NCCE, noted that the youth activists’ engagement was part of the implementation of the Preventing Electoral Violence and Providing Security to the Northern Border Regions (NORPREVSEC) project, being funded by the European Union (EU).

He explained that under the project, the NCCE was undertaking community awareness creation activities on identifying early warning signals of violent extremism, peace building mechanism and measures to counter radicalization of the youth in 14 regions including the five regions of the north, other border regions, hotspot communities, and some coastal areas.

“These community engagements are partly meant to address the tensions being created by activities of violent extremist groups and further prevent the likelihood of democratic relapse”, the NCCE Municipal Director added.

“The essence of the action was to tap into the energies of the youth and use it positively to promote peaceful co-existence and shun violent extremism in Ghana”, Mr Tadoh said.

He pointed out that violent extremism recognized no borders, no cultures, no religion or ethnic group, but rather a phenomenon that affected all of them through increased violence, injury, and death as well as the destruction of basic human rights.

Rev. Dr Timothy Seidu, a Pastor of the Baptist Church, spoke on the 10 peace building mechanisms, which included law abiding, an enticing reason to live, inculcating the spirit of forgiveness, dialogue, the practice of forgiveness, and discussing issues and not attacking personalities.

The rest are resisting evil-doers and opportunists, the act of preaching peace, reporting conspicuous and suspicious behaviours to the police, and adherence to the precepts of the Holy Books.