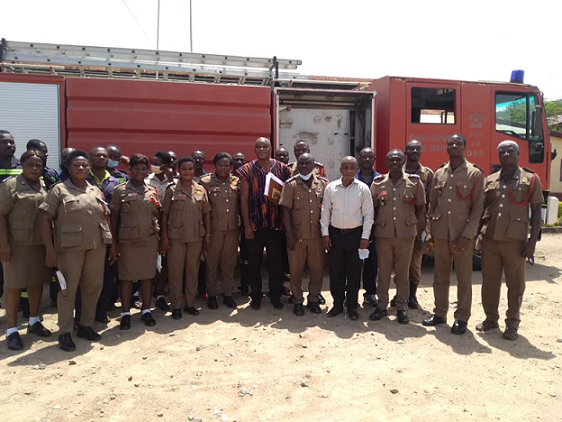 The National Commission for Civic Education (NCCE) in the Eastern Region has urged the security services to be vigilant against threats posed by vigilantism, fundamentalism, and secessionism.

These threats of violence, the Commission said, were a great danger to the country’s unity and stability.

Mr Alex Sackey, Eastern Regional Director of NCCE, gave the caution at separate engagements with various security officers to mark this year’s Constitution Week celebration under the theme: ‘Unity and National Cohesion: The Role of the security services”.

The Constitution Week is celebrated every year since 2001 and it usually starts on the 28th day of April, which is of much significance to the history of the fourth republic, being the date on which Ghanaians voted massively in a referendum to accept the 1992 Constitution, which subsequently came into effect on 7th January 1993.

It said it was set to engage personnel of the Customs Division of the Ghana Revenue Authority to conclude NCCE’s activities at the regional level.

Mr Sackey noted that the week was to remind Ghanaians of the promulgation of the 1992 Constitution, which had been the most enduring one in the history of Ghana, and the need to work hard to preserve and protect it at all times against all forms of abuse and violation.

He highlighted the functions of the NCCE as enshrined in article 233 of Chapter 19 of the 1992 Constitution, which among others includes “to create and sustain within the society, the awareness of the principles and objectives of the Constitution as the fundamental law of the people of Ghana.”

The week is also used “to educate and encourage the public to defend the Constitution at all times, against all forms of abuse and violation”.

Touching on the theme, Mr Sackey observed that the country was at a point where the security services needed to be vigilant because of the existing threats.

He emphasized that there was no way the citizenry could achieve unity and national cohesion when these threats had not been dealt with.

He recalled the incident in 2020 where alleged elements of the Western Togoland secessionists group blocked the main road leading to Akosombo and essentially “held drivers and other commuters’ hostage” for several hours before the security services arrived.

He added that if those elements had been out there to wreak havoc, they would have done so easily.

Mr Sackey, therefore, encouraged the security services to nose for intelligence and share the intelligence so as to preclude such elements from gaining a foothold.

He also advised them to eschew intra-service rivalry and politicization, which ultimately work against the efficiency and effectiveness of the Services.

“In all things and at all times, you must put Ghana first, which also happens to be the overarching theme of NCCE’s activities for the year 2021,” he added.

This year’s theme is: “We are one: Ghana first”.