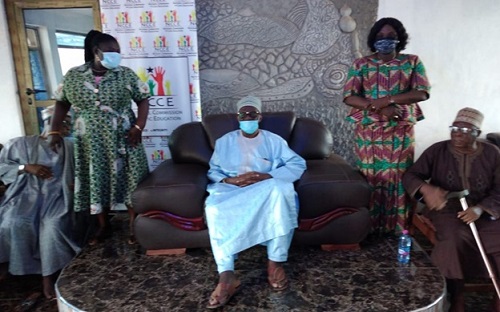 The Ashanti Regional Directorate of the National Commission for Civic Education (NCCE), has taken its sensitization campaign on violent extremism to the palace of the Zongo Chief of Kumasi, Sultan Umar Farouk.

The visit by Madam Margaret Konoma and a team of officials from the Commission was to discuss measures to combat violent extremism and ensure a peaceful co-existence in Zongo communities.

It formed part of efforts by the NCCE to engage key stakeholders in its campaign to sensitise the citizenry on violent extremism, national cohesion and peaceful co-existence.

The NCCE in collaboration with the National Security Ministry has been organising a series of public fora for relevant stakeholders across the country to foster national cohesion by highlighting the consequences of violent extremism.

Madam Konama and her team were, therefore, in the Palace to seek the support of the Chief and his elders in the campaign for peaceful co-existence and national cohesion.

The expectation was that his influence as a traditional leader would significantly enhance the acceptance of the message being propagated by the Commission in the Zongo communities.

The NCCE Regional Director briefed the Zongo Chief and his elders about efforts being made by the NCCE to promote national cohesion and called for his support in spreading the message in Zongo communities.

She said the resurgence of secessionism in some parts of the country was not only a threat to national cohesion but also had serious implications on the sustainability of Ghana’s fragile democracy.

The Commission, she noted, had been strategically engaging the youth in selected districts in the region where peace and security were occasionally threatened by violence and other disturbances.

She underlined the need for Ghanaians to take inspiration from Article 41 of the 1992 Constitution, which enjoins the citizens to foster national unity and live in harmony with others.
.
Peace and stability are essential for development and must be guarded at all times if Ghana wants to make progress, she stated.

Madam Konama entreated the Zongo Chief to show interest in the maintenance of peace in Zongo communities to ensure sustainable development.

The Chief on his part applauded the NCCE for the laudable initiative and pledged his commitment to join the campaign for peace in his jurisdiction.

He said his outfit had been liaising with the Police, Regional Coordinating Council and the media to fight criminal activities in communities such as Aboabo, Sabon Zongo, Yelwa and Sawaba.