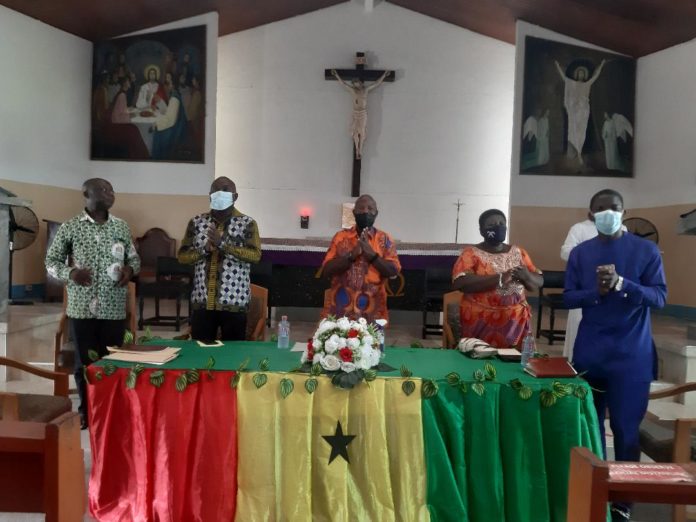 Out of the three candidates, only Mr Isaac Ashai Odamtten, Tema East Parliamentary Candidate for the National Democratic Congress (NDC) showed up while the incumbent MP and candidate for the New Patriotic Party (NPP) Mr Daniel Nii Kwartei Titus-Glover, and Mr Stephen Adjieyeh Adjei for the Ghana Union Movement (GUM), did not honour the invitation to participate.

Mr Timothy Sowah, Coordinator of the OLAM Justice and Peace Committee, giving the address of welcome, said the programme was on the theme: “Role of Parliament, Local Authorities and Participatory Governance in Community Development”.

Mr Sowah noted it was obvious that not many constituents appreciated the role of Members of Parliament, and the Metropolitan Chief Executive in community development therefore the need to engage them on such issues.

He said good governance was about encouraging the people to take part in decision making which would yield benefits including strengthening and deepening democracy.

Reverend Father David Arko Amissah, Parish Priest of OLAMS, in a keynote address, he said a disturbing trend not backed by the 1992 Constitution had crept into the body politics of the country.

Rev Fr. Amissah said the provision of private goods in the form of favours, personal assistance, handouts to chiefs, among others was increasing, noting that some experts had stated that most MPs were complaining about the toll it was having on them, but yet unable to stop it because of its effects on electoral fortunes.

“The MP is increasingly seen as an initiator of constituency and district level development projects, a role which is clearly defined for district assemblies by law. Many commentators attribute this to many unattainable promises that parliamentary candidates make during their campaigns for elections.”

He reiterated the need for the people to be consulted in decision making process, saying their views must be sought, while encouraging and empowering them to participate in the implementation of the decision. “This process promotes transparency, accountability, integration and inclusion in furtherance of communal interest”.

Mr Isaac Kwame Antwi, Tema Metropolitan Director of the NCCE, encouraged Ghanaians to keep its good record of having free, fair and violence-free elections seven times under the forth republic.

Mr Antwi reminded the public especially political actors that violence and civil wars would deprive every one of their fundamental human rights including schooling, marriage, development, and work among others.

He said electorates should not loiter around polling centres after voting but return for the count, stressing that until declaration of the collated results were made, “there is no winner”

Mr Samuel Commodore, representative of the Electoral Commission, said the EC was committed to ensuring that they delivered a dispute free election in the constituency.