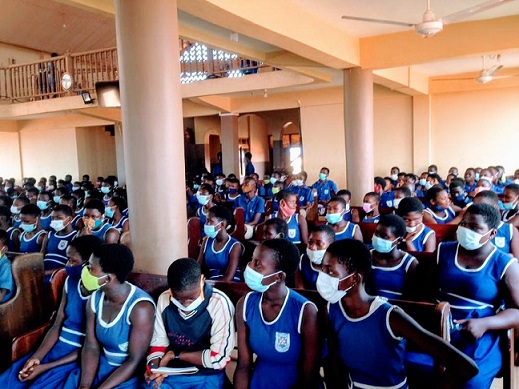 The National Commission on Civic Education (NCCE) has reminded school pupils of their responsibilities as active citizens, and their role to build a strong, vibrant and democratic Ghana.

The Commission targeted 60 basic schools for the education as part of the 2021 Citizenship Week in the Sekondi/Takoradi Metropolis.

Mr. Kwame Lan Tugbenu, the Metro Director of the NCCE said there was also a platform for eminent personalities considered worthy role models in society to interact and impart virtues of good citizenship to the pupils.

This year’s theme: “we are one , Ghana first’ therefore emphasised patriotism, nationhood, unity, national cohesion, loyalty to the state, and hard work as shared positive values which engendered good character development among the children.

The Citizenship Week celebration sought to inculcate the spirit of good citizenship in the pupils to grow up as responsible citizens with the spirit of oneness and patriotism and to sensitise the people on the need for national unity and peace.

He said the week also promoted democracy and good governance and increased the children’s knowledge and understanding of some pertinent national issues.

The Commission used mentorship approach as a strategy for delivering the Citizenship Week talks and People who had excelled in their chosen occupations.

While imparting knowledge, the volunteers further served as role models and shared success and motivational messages with the pupils.