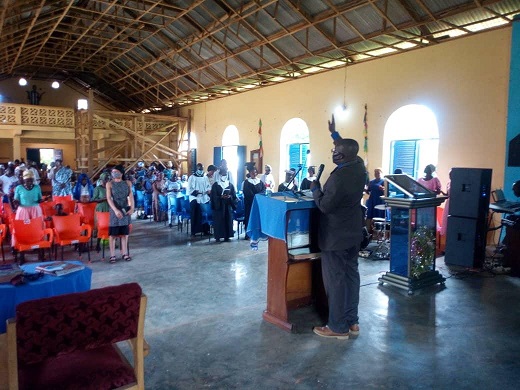 Reverend Leonard Kofi Aglomasa, the Biakoye District Director of the National Commission for Civic Education (NCCE), has called on the citizenry to protect the country’s water sources from further pollution and degradation.

He said it was important to protect the nation’s environment, especially water bodies, as water was a finite resource and could be exhausted.

“Water affects everything, when there is available water within the reach of people, it reduces the time spent by women and children looking for it,” Rev. Aglomasa said.

He was addressing congregants of the Evangelical Presbyterian (EP) Church at Bowiri Amanfrom in the Biakoye District of the Oti Region as part of activities marking the 2021 Constitution Week Celebration.

“God, in His own wisdom, created the heaven and the earth, the plants and rivers before human beings for the good of mankind, but now man is destroying what God has created to sustain him on earth,” he said.

Rev. Aglomasa, who is also a Pastor of the EP Church, said Ghanaians must see the rivers, trees and the land as their neighbours and stop the destruction.

On the Constitution, he said the 1992 Constitution had survived for 29 years and been the longest after the 1960, 1969 and 1979 Republican Constitutions.

As such, Ghanaians must help protect, defend and safeguard it at all cost, he said.

Rev. Aglomasa said though democracy seemed expensive, it was better than military rule as one had the liberty to express his or her views on topical issues without intimidation and harassment.

He appealed to the people to promote the good name of Ghana and respect the symbols of the nation, foster national unity, live in harmony with others, and work conscientiously in their chosen professions since it was a civic duty.

Rev Aglomasa advised them to contribute to the development of the community where they lived because the state could not do it alone.

Mr Jonathan Sakyi, a Catechist, on behalf of the Church, commended the Commission for the educative programme.