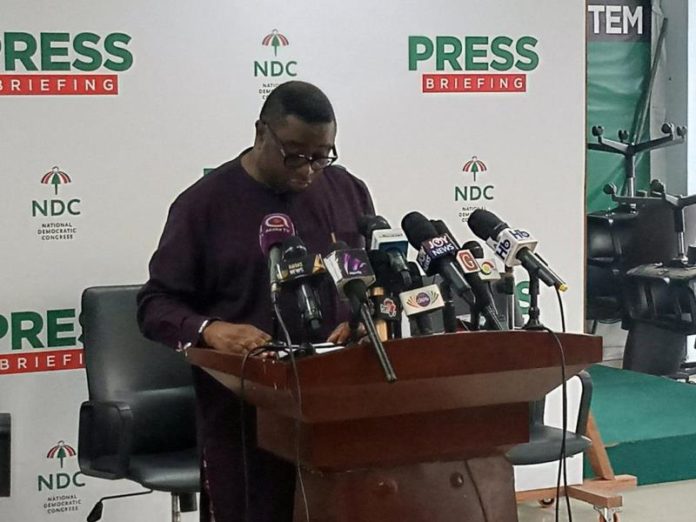 The National Democratic Congress (NDC), has called on government to trigger the Presidential Transition Process as required by law.

According to the Party, government had failed to activate the Presidential Transition Process for reasons best known to itself.

Section 6 (1) of the Presidential Transition Act, 2012 ( Act 845) states: “The Office of the President shall prepare a set of comprehensive handing-over notes covering the term of office of the president as the executive authority under article 58 of the Constitution”.

Section 6(4) of the Act also states that, ” the original and five other copies of the handing over notes shall be presented to the Administrator-General appointed under section 8(2) not later than thirty days before the date of the Presidential election”.

Mr Elvis Afriyie-Ankrah, the Director of Elections for the NDC, at a press briefing in Accra said, though “we are 11 days to elections, government failed to comply with the Act.

“We also have information that the Administrator-General has retired, but a new one has not been appointed.

“We are calling on President Akufo-Addo to trigger the transition process by preparing his handing-over notes and also appoint a new Administrator-General to oversee the transition process within 24 hours after the declaration of results,” he said, adding that ” there’ s no power that can stop a determined people from removing a bad government.

He said it was obvious that the NPP government had failed Ghanaians and nothing could save them from the wrath of Ghanaians come December 7.

On compliance, he said, the government and the Electoral Commission must ensure compliance with international norms and practices to facilitate peace before, during and after elections.

“We urged all Ghanaians to be patriotic and courageous by coming out on their numbers to vote and to ensure that only their sovereign will prevail at the end of the elections.

“It is not enough to vote. We must ensure that our vote is protected. We must remain vigilant until the last ballot is counted and results declared,” he said.