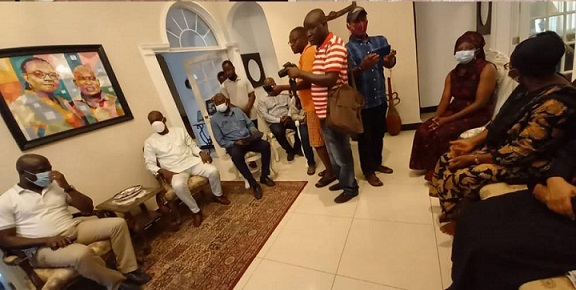 The visit was to sympathize with the family on the loss of their beloved.

Mr Iddrisu who is also the Member of Parliament (MP) for Tamale South Constituency, during the visit, eulogized the late Dr Gariba, and said Ghana had lost an intellectual pillar in the country’s governance space.

“No historian can write about the Fourth Republican Ghanaian Constitution and democratic governance and their evolution and policies without mentioning Dr Sulley Gariba”.

“He is known to have worked with every political administration in our country, be it the People’s National Convention (PNC), New Patriotic Party (NPP) and the NDC, and that means he simply had faith in Ghana and its capabilities to address its own challenges and create opportunity for prosperity for citizens,” the Minority Leader said.

He expressed former President Mahama’s condolences to the bereaved family for their loss, and encouraged them to be strong in this difficult time.

Otunba Moses Oladele, a family member, who spoke on behalf of the bereaved family, expressed gratitude to the Tamale South MP and his entourage for coming to console them as they mourn their beloved.

The Minority Leader was accompanied by some MPs, Alhaji Ibrahim Mobila, Northern Regional Chairman of the NDC and some party executives.