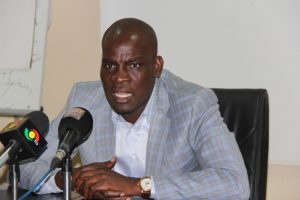 The next National Democratic Congress (NDC) administration will reform and expand access to professional legal education in Ghana, Mr Haruna Iddrisu, the Minority Leader in Parliament, has said.

He said the NDC government would provide opportunities to qualified Bachelor of Laws (LLB) holders by granting accreditation to certified law faculties to undertake the professional law qualification course across the country.

Speaking at the People’s Manifesto launch of the NDC in Accra, Mr Iddrisu said the NDC government would review the Legal Profession Act in consultation with stakeholders.

He said the NDC government would also establish a Council for Legal Education and Training to accredit certified law faculties to run the
Professional Law Course subject to the oversight supervision of the Council.

He said they would establish a Faculty of Law in the Northern Region to serve the northern sector of the country.

He said a new NDC administration would ensure that the judiciary was fearless and independent; adding that they would seek to improve the conditions of service for all workers of the judiciary.

He said they would also assist the judiciary to establish some courts of appeal in the Western, Northern, and the Volta Regions to facilitate speedy adjudication of justice.

“We will also increase resources and expand access to Legal Aid to the poor and the indigenes,” he said.

On corruption, Mr Iddrisu said the next NDC government would reduce the number of ministers and review and reform the Ghanaian public service to respond to COVID-19 emergencies and deepen the administration efficiency of those institutions.

He said the next NDC Administration would make corruption once again a high-risk activity by establishing “Operation Sting,” to deal with the issues of corruption.

“John Dramani Mahama will find answers to the unanswered questions of corruption,” the Minority Leaders stated.

He said public officials who demonstrated attempts to loot the public purse would be punished.