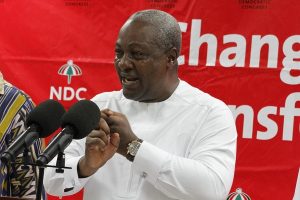 Former President John Dramani Mahama, the Flagbearer of the National Democratic Congress (NDC), has reiterated the Party’s position to ensure a peaceful election in December.

He pledged the NDC would not use any vigilante group to cause mayhem on December 7 and urged supporters in the various communities to protect the ballot boxes to guarantee the integrity of the ballot.

“We commit the ballot boxes into your hands that you ensure that nobody comes to destroy them at your polling stations because your vote must count,” he added.

Mr Mahama urged Ghanaians to turn out in their numbers on the Election Day “to vote for respect for all ethnic groups, inclusion, unity, jobs and tolerance by voting for the NDC,’’ a statement copied to the Ghana News Agency said on Tuesday.

Mr Mahama made the remark in an address to the chiefs and people of Mepe in the North Tongu Constituency as part his four-day tour of the Volta Region, the statement, signed by Mr James Agyenim-Boateng, Spokesperson of the NDC Campaign Team, said.

He, however, expressed concern about the posturing of government in some instances, which raised questions about its commitment to a violent-free election in December.

“In December we will go for an election and we want our election to be non-violent…,” he said.