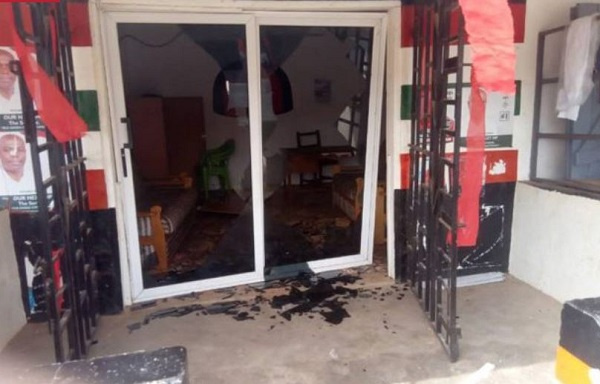 Six people suspected to be members of the National Democratic Congress (NDC) have been arrested for vandalizing the party’s office at Ogome, a suburb of Somanya in the Yilo Krobo constituency of the Eastern Region.

Police did not give the names of the suspects to the Ghana News Agency.
The group damaged two padlocks on the front metal gate and broke down the main glass door to gain access to the premises, whilst preparation was underway for balloting parliamentary candidates of the NDC for the constituency.

The Eastern Regional Police Public Relations Officer, Deputy Superintendent of Police ( DSP), Ebenezer Tetteh told the GNA that the agenda of the group was to prevent one of the candidates, Albert Tetteh Nyarkotey, from participating in the balloting process.

In addition to the six, he said one other suspect, Emmanuel Nartey Nsiah, NDC Youth Organizer for Agavenya, a suburb of Somanya was later arrested to assist the police in investigations.

He assured the public that efforts were underway to arrest the other culprits involved, and advised the youth to desist from such acts as the country prepared towards presidential and parliamentary elections later this year.