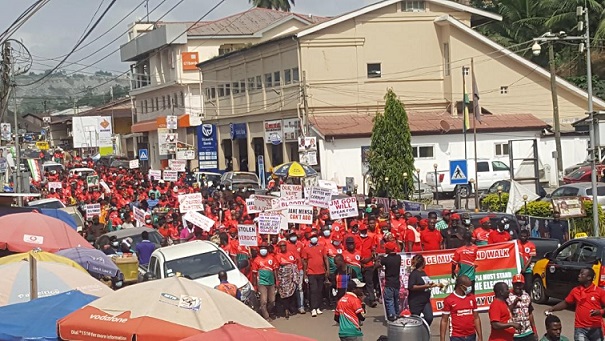 The Western Regional branch of the National Democratic Congress (NDC) on Wednesday led a peaceful demonstration in Tarkwa, to protest against the results of this year’s election.

The demonstration saw hundreds of sympathizers of the largest opposition party clad in red and black attire marched through the principal streets of Tarkwa.

Some of the placards held by the demonstrators read “Tarkwa-Nsuaem deserves better”, “We demand justice”, JM’s God will speak for you”, “Stolen verdict”, “Jean Mensah must resign” and “Mahama is a man of peace”.

Addressing the demonstrators at the forecourt of Tarkwa community center after the march, the Regional Chairman, Nana Toku condemned the alleged unprofessional behaviour of the duty bearers detailed in the Tarkwa-Nsueam constituency on December 7.

He, however, expressed appreciation to the party’s supporters for the massive support they have exhibited before, during, and after the December Elections.

Nana Toku pleaded with the supporters to exercise patience as the leadership of the party had instituted measures to claim both the Presidential and Parliamentary seats they won legitimately.

Mr Joe Nelson, Regional Secretary of the NDC, later led the team to present a petition challenging the declaration of Mr George Mireku Duker as the Member of Parliament elect for Tarkwa-Nsuaem constituency and Nana Addo Dankwa Akufo-Addo as the President-elect for the Republic of Ghana to the Municipal Electoral Officer at Awhitieso.

He told the Ghana News Agency (GNA) that “at the constituency level the Electoral Commission leadership did not do well, by succumbing to the will of the military in doing their job. There are laid down procedure for any election, if the EC fails to adhere to that then they have disrespected the will of the citizenry who queued to vote”

“We have simply put together our grievances about what happened on the election day, hence in the interest of Ghana, the EC should take a second look at what transpired at the Tarkwa-Nsuaem constituency collation center on December 7” Mr Nelson pointed out.

The Electoral Officer, Mr Ekow Essien, who received the petition on behalf of the chairperson of the commission promised to forward it to the appropriate quarters for redress.