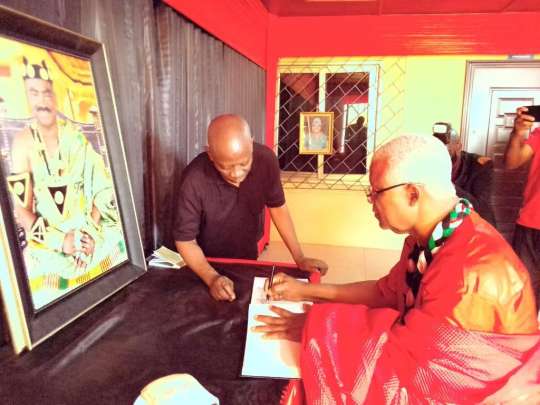 The leadership of the National Democratic Congress (NDC) in the Volta Region on Monday signed a book of condolence in memory of the late Togbega Gabusu VI, Paramount Chief of the Gbi Traditional area.

Mr Henry Ametefe, the Volta Regional Chairman of the Party who led the delegation from the Regional Secretariat and the Hohoe Constituency said the Party in accordance with tradition was mourning with the Gbi Traditional Council.

He noted that Togbega Gabusu’s role as a traditional leader and commitment to development went beyond his area and the region, deserving commendation.

Mr Ametefe said the Party and its Members of Parliament (MPs) were ready to support the Traditional Council to give Togbega Gabusu a befitting burial.

Professor Margaret Kweku, the NDC Parliamentary Candidate for Hohoe Constituency described the late Togbega Gabusu as “open to all” irrespective of place of origin and was instrumental in the traditional area benefitting from many projects.

He said the Council recognised the “good works” done by the NDC when in power and expressed gratitude to it for honouring the memory of Togbega Gabusu.

The Party presented a carton of Castle Bridge, two bottles of Schnapps, two bottles of assorted wine, four crates of minerals, 20 packs of water and a cash amount of GHC 1,000.00 to the Council.