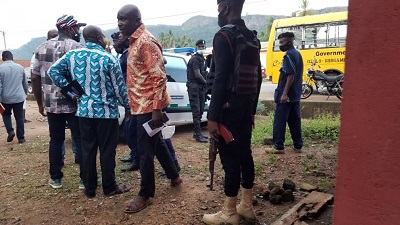 Some supporters of the National Democratic Congress (NDC) in the Ho West Constituency of the Volta Region, on Thursday accused a police officer of being a vigilante.

The allegation caused an escalation of tension that began at the tail end of the constituency parliamentary candidates’ debate.

The police officer vehemently condemned the vigilante tag and in a heated rage, seemed willing to pounce on his accuser but was restrained by colleagues.

The Ghana News Agency, which was covering the event, witnessed him declare his nonpolitical affiliation, and was whisked to the police patrol vehicle to calm down.

The confusion began, when the NDC supporters accused officials of the National Commission for Civic Education (NCCE), who had organised and were moderating the programme, of letting the DCE use the event to “campaign” for the sitting Government.

According to them, the NPP candidate had refused to honor the invitation to attend, and thus the DCE, who occupied an office on the ticket of the Party, must not benefit from the platform.

They said NPP candidates had over the period shunned the debates.

The situation threatened to blow out of control, and the police unit saw the need to intervene, while the NDC parliamentary candidate temporarily exited the venue in protest.

All other candidates present jumped upon the opportunity to condemn the existing political duopoly and encouraged candidates to vote a third Party into power.

Mr Emmanuel Kwesi Bedzrah, incumbent NDC Member of Parliament, who was seeking re-election, vowed to lodge a formal complaint to the head of the NCCE over a “bias moderation.”

Meanwhile the DCE told the GNA that he had been invited to the programme as a representative of government and sought no political motive.

Ho West ranks among constituencies with the most hotspots in the Volta Region.