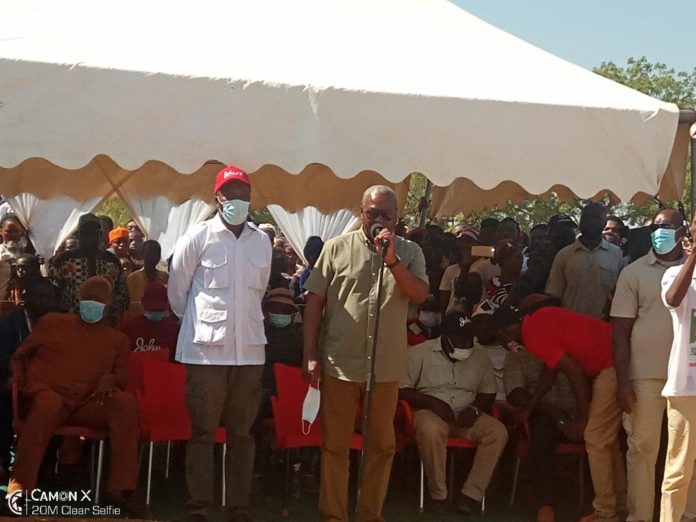 Mr John Dramani Mahama, Presidential Candidate of the National Democratic Congress (NDC), has promised the chiefs and people of Bawku that the NDC administration will build an ultramodern market for the area.

This, he said would enable traders in Bawku to have a better place to ply their trade.
Mr Mahama made a promise at a mini rally in Bawku, as part of his four-day campaign tour of the Upper East Region.

Former President Mahama urged the people of Bawku to vote massively for him and Mr Mahama Ayariga, the NDC Parliamentary Candidate for Bawku Central in the December 7 polls for him to come back to restore the good policies of the NDC.

He recalled that in 2016 he made a promise to the people of Bawku that when the NDC wins the election, they would build an ultramodern district hospital for them, unfortunately, they didn’t win the election.

“But I know that come December 7, NDC is going to win the election, and I am making that promise again that, we are going to build a brand new district hospital here in Bawku.

“And when we say it, we mean it, because we have done it before. We have built hospitals before.”

The NDC Presidential Candidate, therefore, appealed to Ghanaians to vote massively for the NDC in the December 7 polls for it to come back and continue its national development projects that they started.

“There are many communities that we were connecting to the national electrification grid, we didn’t finish before we left office. As soon as we left office all that came to a standstill,” he said.

“I promise you that NDC is coming back to power and for all the communities that doesn’t have electricity, we will come and extend electricity to you.

“When we were in office, we started building the Tamne Irrigation Dam, we didn’t finish before we left office. After we left that project has come to a standstill, and that project was supposed to irrigate 3,000 hectares of land for dry season irrigation farming,” he said.

Mr Mahama said when the NDC regains power, “we will construct larger irrigation dams in farming districts”.
Prior to addressing the rally, the NDC Presidential Candidate also paid a courtesy call on Zugraana Naba Asigri Abugrago Azoka II, Bawku Naba at his Palace in Bawku to seek his blessings ahead of the December 7 polls.