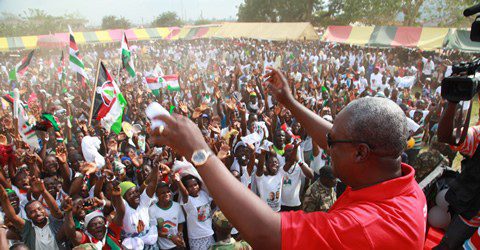 The opposition National Democratic Congress (NDC) has called on its supporters and sympathisers to remain calm in the run-up to the Supreme Court’s verdict on the December 2020 election petitionon on Thursday, March 4, 2021.

The country’s apex court is expected to deliver judgement on a petition filed by John Dramani Mahama, NDC’s Flagbearer in the 2020 Presidential election on Thursday.

He is praying the court to order the Electoral Commission to organise a run-off between himself and Nana Addo Dankwa Akufo-Addo.

In a statement issued and signed by Mr Johnson Asiedu Nketiah, General Secretary of the party after a meeting by its National Executive Committee (NEC) and copied to the Ghana News Agency (GNA) in Accra, the party urged its supporters to continue to remain calm and resolute as Ghanaians waited for the verdict.

“It is the prayer of NEC that the Supreme Court will uphold and promote probity, accountability and transparency, and give effect to the will of the people expressed on 7th December, 2020 in its judgement on the matter.

“The party will on its part, stop at nothing to rid the Jean Mensah-led Electoral Commission of its partisan biases and prejudices, and ensure transparency and fairness in national elections,” the statement said.

The party has, however, condemned “legal threats” issued by the Judicial Service against some media houses over what the service said was the publishing of “hateful, indecent and offensive statements against judges.”

It said the party found the letter from the Service as an effort which sought to limit the right to free speech and press freedom.

“NEC holds the view that, the Judicial Service has no right or authority to threaten anyone, much less the Media, for performing their constitutionally mandated duties.

“We condemn it in no uncertain terms and call on the Judicial Service to withdraw same without delay, as a sign of respect for the democratic culture of free speech and press freedom,” it added.

It, therefore, urged the Judicial Service to use the constitutionally laid down procedure to deal with specific infractions of media ethics and laws.