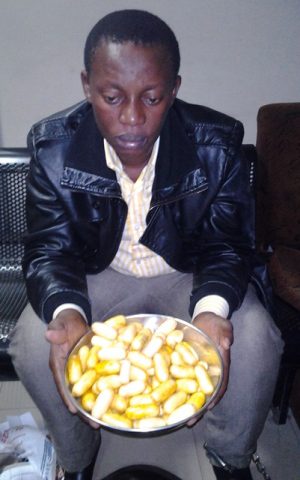 ezimora chidi with his drugs The Chairman/Chief Executive of the National Drug Law Enforcement Agency (NDLEA) has ordered the close monitoring of passengers and goods on Nigeria-Brazil route. The directive was given as operatives of the Agency apprehended four suspected drug traffickers at the Murtala Muhammed International Airport (MMIA) Lagos over illegal importation of 3.455kg of cocaine. The suspected drug traffickers were caught with substances that tested positive for cocaine while returning from Brazil.

According to Giade, ?we shall continue to step-up surveillance on passengers from Brazil. Several arrests have been made on the route and we are prepared to stop drug cartels from smuggling narcotics into Nigeria?.

NDLEA commander at the Lagos airport, Hamza Umar gave the names of the suspects as Ezimora Chidi, Ibrahim Lukeman Elemosho, Chukwu brown Chigozie and Mbachu Precious Ifeanyi. ?Ezimora Chidi was arrested with Ibrahim Lukeman Elemosho in connection with 1.5kg. Ibrahim Lukeman was also linked with Chukwu Brown Chigozie over 815 grammes of cocaine. The last suspect Mbachu Precious Ifeanyi was found in possession of 1.140kg of cocaine. While Ibrahim hid the drugs inside his socks, others simply packed the drugs inside their bags. We are investigating the four suspects and will soon charge them to court? Hamza stated.

Ezimora Chidi who is an auto parts dealer said that he was promised half a million naira to smuggle cocaine from Brazil. ?I am 32 years old. I am single and sell auto parts. I was having problem with my business until I met a friend who promised to help me. He introduced me into drug trafficking and I had wanted to marry with the half a million naira they promised me? Ezimora who hails from Anambra State told investigators.

Ibrahim Lukeman Elemosho, a 32-year-old trader from Kwara State said that he made a mistake getting involved in drug trafficking. In his words, ?I am married with two children. I used to buy females clothes, bags and shoes from Dubai. It was in Dubai I met a Nigerian who persuaded me to smuggle cocaine to Nigeria. I accepted because they offered to pay me a million naira. I need help because I have made a mistake?.

The third suspect, Chukwu Brown Chigozie, an auto parts dealer from Abia State told investigators that he was offered 3,000 dollars to smuggle cocaine. Mbachu Precious Ifeanyi, a 42 year old from Imo State also attributed his involvement on lack of finance. ?I live in Sau Paulo, Brazil where I sell African foods to earn a living. I was given a quit notice and I needed money to rent another shop. I was expecting 17,000 dollars from the sales of the drugs. Unfortunately, I was arrested. I feel bad and sad? Mbachu stated.

All four suspects will soon be charged to court.