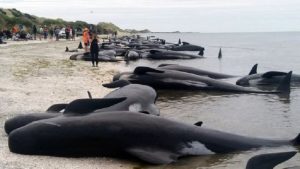 Six more whales were rescued in a mass stranding on the west coast of Australia’s State of Tasmania on Friday, bringing the total number of freed long-finned pilot whales to 94.

Local authorities said they were hopeful to save another 12 to 20 whales which had been assessed as having the best chance of survival, in a way as quick and humane as they can.

Wildlife biologist Dr. Kris Carlyon from the Tasmania government said they had not seen a whale rescue mission at this scale before but confirmed they had enough volunteers who were giving great support.

However, some of those freed whales had re-beached overnight and some of them have died.

“We do have several live animals that we are assessing. We will look at refloating those animals and giving them another chance,” he said.

From early this week, there had been 470 whales discovered at Macquarie Harbor surrounding area, which was the biggest whale stranding event ever seen in the state.

According to the revised number released by Tasmania’s Parks and Wildlife Service on Friday, 350 of the whales have died.