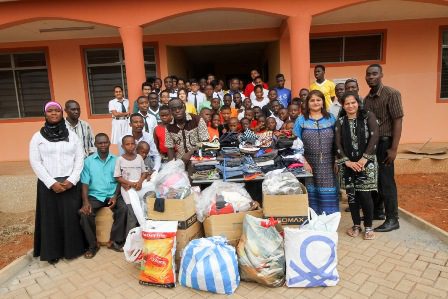 The Delhi Public School International (DPSI) has extended its support to the Don Bosco Centre in Tema by donating various items and a sum of money.

The items include clothes, books, shoes, toys, bags and a cheque of Gh? 1000. The centre was established in March this year to rehabilitate children who are victims of child labour, abuse and trafficking. So far, 7 children have been restored to their families and 35 children are currently been supported in boarding schools around the country.

During the presentation, the first lady of the school, Mrs.Tanya Thakwani told XFM’s David Apinga that the gesture is part of their social responsibility to the community and pledged more support to the centre.

Madam Tanya was so touched by the horrific stories of the children at the centre and advised parents to be responsible in taking care of their children. She cautioned parents who exchange their children for money or other items to desist from the practice.

Mrs.Tanya Thakwani is the wife of Mr. Mukesh Thakwani who is the CEO of B5 Plus, the biggest steel importer in Ghana, and the founder of DPSI in Ghana. ?I was feeling something for those children and I even heard that some parents sell their children for fish. It?s painful but also refreshing to see that certain organisations have embarked on a move to help these children?, she added.

In a delightful mood, the Director of the Centre, Rev. Matthew Akinyemi thanked DPSI for the kind gesture and noted that the support will be an inspiration to intensify the work of the centre.

?There are a lot of people who have more than enough but do not think about the less privileged and to see people come to the aid of the centre is very laudable?.

Rev. Akinyemi advised people involved in trafficking to stop the act because it deprives the children of their dignity, prevents them from realizing their God given gifts and makes them feel less of a human.

He says child victims of trafficking become traumatized, become negatively affected psychologically and could grow to become a threat to society.

The donation forms part of activities that is been spearheaded by a group of students who belong to the Head of State Award (HOSA) Programme.

Gabriel Nii Amasa Blankson, a Tutor of the school and Coordinator of the HOSA programme disclosed that the importance of HOSA can not be underestimated.

He says HOSA challenges young ones to learn and develop their talents and skills. According to him, the programme exposes children to different developmental experiences that will help them to succeed in life.

He thanked the board of directors for HOSA for the opportunity given to the school, which he feels, will go a long way to affect the children positively.