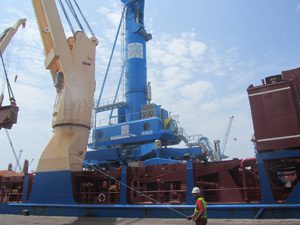 One of the cranes on a vessel to be discharged at the Tema Port.

THE GHANA Ports and Harbours Authority (GPHA) has taken delivery of two new mobile harbour cranes with modern features to facilitate the clearing and discharging of cargoes at the Tema and Takoradi Ports.

Two of the Liebherr cranes, valued at $14 million bought from Germany, were to help handle vessels with fragile gears and to enhance the efficiency of the operations at the ports, pending the execution of the master port expansion project.

Mr. Paul Asare Ansah, Marketing and Public Relations Officer of the GPHA, speaking to a section of the media at the Tema Port, intimated that the new cranes would enhance operations at port, adding that ?One of the two has been discharged in Takoradi. The Tema crane was purchased at a cost of $8 million and the Takoradi one purchased at $7 million.?

According to him, ?The special thing about these cranes is that they help us to fill in the gap when we receive vessels which gears are not strong. This crane has a special component, a platinum system, that can make it faster with several attachments.?

The Marketing and Public Relations Officer explained that the delivery of additional cranes would help to handle the increasing volumes and tonnages of cargo, pending the master expansion project.

He was optimistic that with the delivery of the cranes, there would be a number of changes in the operations at the two ports to serve the public better.

With the improvement of services at the port, GPHA is expected to increase its cargo tonnage from 830,000 to one million tonnes. The authority has projected receiving and discharging about two million containers in 2015.

Touching on the expansion projects which involve dredging, reclamation of land from the sea, construction of terminals for cargo and sea passengers, Mr. Ansah said that 15 bids had been received at the end of the deadline for expression of interest in the development of a container, railway and cruise terminals.

He said that the bids would be shortlisted, scrutinized and the credible bidders would be invited before the awarded of the contracts.

Other works to be carried out are the extension of the breakwater, oil rig, roads and flyover on the Sakumono lagoon.