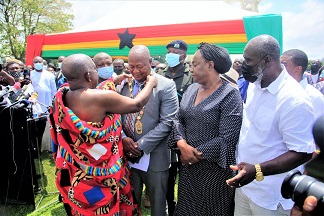 On October 08, 2021, history was made with the swearing-in of a new Mayor for Kumasi, Ghana’s second-largest city.

Mr. Sam Pyne, hitherto, the Ashanti Regional Secretary of the ruling New Patriotic Party (NPP), at a symbolic event held at the Regional Coordinating Council’s (RCC) premises at Ridge-Nhyiaseo, would be ushered into office after taking an oath.

The former teacher becomes the seventh Mayor to be given the mandate to engineer affairs in the metropolis, under the Fourth Republican Constitution, taking over from Mr. Osei Assibey-Antwi, currently the Executive Director of the National Service Scheme (NSS).

It has long been regarded as the commercial capital of Ghana, attracting tens of thousands of traders across the sub-Region on a daily basis.

Mr. Pyne is taking office at a time when Kumasi is grappling with varied development challenges, ranging from sanitation and waste collection, congestion at the Central Business District, illegal siting of structures, security to environmental issues.

According to the Ministry of Sanitation and Water Resources, about 40 percent of all dwellers in compound houses in Kumasi are without private places of convenience and proper waste systems.

Sight could also not be lost of the mounting debt staring the Metropolitan Assembly in the face, low level of internally-generated funds, domestic tourism drive, and infrastructural growth.

What about the recurrent floods, which had become ‘an annual ritual’, claiming scores of lives with their attendant destruction to property worth several millions of Ghana Cedis?

Dr. Stephen Appiah Takyi, a Development Planner, in a recent interview, acknowledged the huge responsibility in store for whoever was appointed as the Mayor.

According to him, a visionary leader who had the technical expertise and also conversant with the modern-day demands of managing a city, was what was needed to harness the potentials of Kumasi.

In his view, some emerging issues such as climate change, population growth, advancement in science and technology, should inform development policies and planning of the city.

Mr. Pyne, in an interview with the Ghana News Agency, after he had been sworn into office, said the job at hand demanded the support of all identifiable groups.

“I believe in an all-inclusive administration,” he noted, saying, the daunting task was surmountable given the needed cooperation and unity of purpose.

He cited his resolve to continue with projects being undertaken to bring development to the metropolis, such as the, ‘Keep Kumasi Clean and Green’ project, an initiative meant to restore to Ghana’s oldest city its status as the ‘Garden City of West Africa’.