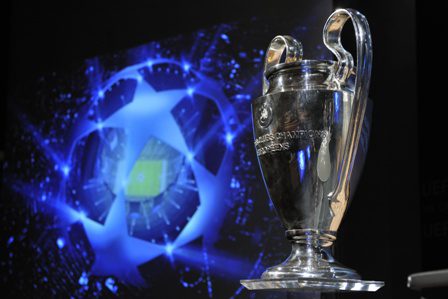 The Champions League Trophy Tour presented by Heineken, official sponsors of the famous UEFA Champions League competition, is on a rare tour of the United States before it goes back to Europe for its final leg on the way to Berlin where the final will be held on June 6 at the Olympic Stadium. The tour is a continuation of the momentum which kicked off in February, as part of Heineken’s launch of the #ChampionTheMatch campaign.

Heineken announced it is making it easier than ever for U.S. fans to experience the passion of the UEFA Champions League by offering a rare chance to get close with the ultimate prize through the UEFA Champions League Trophy Tour Presented by Heineken. The tour is to give fans, 21 and older, in New York City, Dallas and Los Angeles the opportunity to snap a selfie with one of the world’s most celebrated trophies, view an interactive Champions League exhibit featuring legendary game-worn gear, and have a Heineken alongside some of the tournament’s biggest stars.

“We’re massive fans of soccer in the U.S., and because of timing, we understand how tough it can be to experience the excitement of the UEFA Champions League in real-time,” said Ralph Rijks, Vice President of Heineken USA, which is a subsidiary of Heineken International. “Whether it’s through the UEFA Champions League trophy tour, live Twitter chats with legends, or an additional surprise we’ll have along the way, the ‘Champion The Match’ campaign is finally offering U.S. fans unparalleled access to the sport they love, all tournament long.”

This US tour kicked off last week in New York City, where former Liverpool goalkeeper Jerzy Dudek and New York City captain David Villa, both winners of the trophy in 2005 and 2011 respectively, were the special guests. Dudek, goalkeeping hero of Liverpool’s greatest European Cup
Comeback victory over Milan in the ?Miracle of Istanbul? in 2005, took the opportunity to sign autographs of his photo souvenir from the Istanbul victory for fans, some of whom were Liverpool fans, from the New York branch of the Official Liverpool Supporters Club.

The tour continues in Dallas on April 17 and 18 and concludes in Los Angeles on April 21 and 22. Former Dutch star Patrick Kluivert, who scored the winning goal in Ajax?s victory over AC Milan in 1995, and Eric Abidal, winner with Barcelona in 2009 and 2011, will be the special guests in Dallas, whilst former Real Madrid winning heroes Fernando Morientes and Michel Salgado are the legends on show in Los Angeles.

Patapaa Amisty to take “One Corner” to an International level