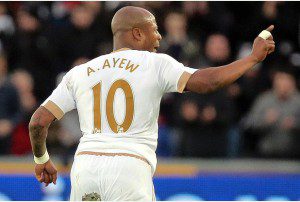 The 26-year-old stole the limelight over the weekend when he scored a crucial winner for the Swans in their 2-1 win at Goodison Park.

The Ghana international, who has been constantly linked with a move to either Sunderland or Newcastle, put in another scintillating displays against the Toffees.

Sunderland and Newcastle fans have been key admirer of the Black Stars vice-captain.

Swansea deserve there lead. Everton poor, no intensity to there game. Ayew impressive too #safc

Andre Ayew wins Swansea the game, wish we had him #SAFC

And some people don’t want us to sign Ayew. ?? #safc

I suspect even if Swansea accept a bid from us for Ayew, he would refuse the move #safc

#NUFC we’re interested in Austin, Ayew and Alli last year/season… We got Mitrovic, Thauvin and Colback instead. Carr at his finest

How did Graham Carr watch Ayew, Payet and Thauvin and then think Ayew for free? Naa! Payet for £10.5m? Naa! Thauvin for £14m? Aye! #NUFC

If Ayew is available for £7m, it would be ludicrous for #NUFC not to make a move. Strengthen while weakening a rival and gazumping #safc.

@MarcSDuffy if Ayew is available we should be one of the clubs after him, if Sunderland get him they could stay up. #NUFC