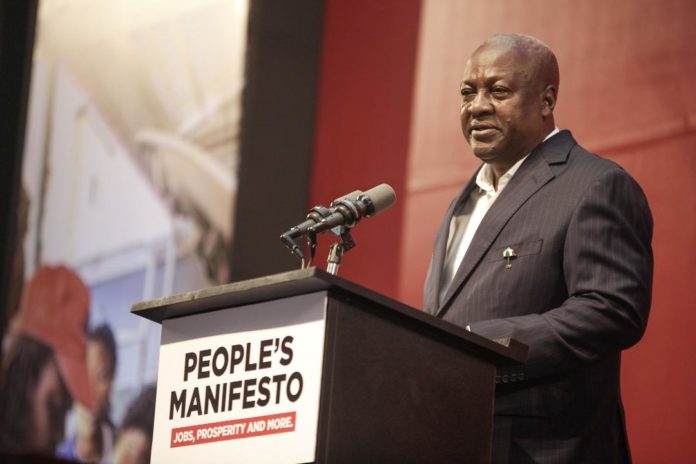 The next National Democratic Congress (NDC) government will reverse the decoupling of the value-added tax (VAT 12.5 per cent), National Health Insurance Levy (NHIL 2.5 per cent), and GETFUND (2.5 per cent), which has brought untold hardships to Ghanaian businesses and households.

Former President John Dramani Mahama, the NDC Standard-bearer, said the New Patriotic Party-led Government in 2018 increased the VAT rate under the guise of decoupling the NHIL rate and the GETFund rate from the value-added tax system and making it a straight levy.

He stated this at the NDC’s Manifesto launch in Accra on the theme: “The Peoples Manifesto – Changing Lives: Transforming Ghana.”

Mr Mahama said even though the statutory rate remained at 17.5 per cent after the decoupling, the effective rate increased from 17.5 per cent to 18.5 per cent because businesses were not allowed to claim their input VAT for the NHIL and GETFund components of the VAT.

He said the NPP, through the backdoor, introduced a Rural Investor Incentive (RII) Tax and that the next NDC government would exempt investors in rural communities from dividend and capital gain tax.

He said companies that employed up to 50 persons would be granted tax exemptions and other incentives on the importation of capital equipment and provide special tax incentives for indigenous value chain industries such as mineral-processing, petroleum-based, agro-based, and pulp and paper industries to unlock potential sustainable job opportunities.

He said the government would also introduce a Tax Support for Export Growth (TSEG) to address trade and balance of payment deficits and also in furtherance of the One Million Jobs Plan.