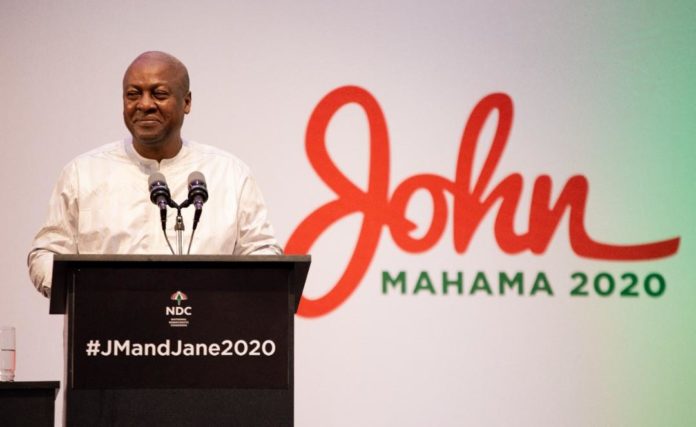 Former President John Dramani Mahama, Flagbearer of the National Democratic Congress (NDC), has said his next government will, within one year, pay all whose funds are locked up with the collapsed financial institutions.

Speaking at the outdooring of Professor Naana Jane Opoku-Agyemang as his running mate in the 2020 General Election, he said it was unjustifiable the huge amounts of money being spent by government to manage the impact of the collapse, now put at GHC21 billion.

“I pledge on behalf of the NDC that we shall pay within one year all who have funds locked up with the collapsed financial institutions. Within one year. I promise!”

Former President Mahama said his next administration would not put up any long-term payment plans that would further worsen the living conditions of the victims.

As had been introduced in other economies, the next NDC administration would establish a financial services authority that would be responsible for ensuring that consumer financial markets worked for consumers, providers and the economy as a whole, he said.

He said the authority would oversee all financial products and services that were offered to consumers, and would effectively and efficiently prevent the challenges that had confronted customers of Menzgold and DKM, among others.

“We will restore Ghanaian indigenous investment in the banking and financial sector through a tiered banking structure in order to restore viable credit sources for Ghanaian small and medium enterprises (SMEs),” the former President said.

He promised to pay contractors who had not been paid for four years their hard-earned monies through no fault of theirs.

Prof Opoku-Agyemang, in her inaugural address, said she was deeply humbled by the trust reposed in her by the NDC and that the John and Jane Ticket was best poised to confronting the daunting challenges of the times and usher Ghana into recovery and prosperity.

“It will be my mission to ensure that the voices and concerns of our children, our youth and our aged, our persons with disabilities are reflected in critical decisions,” she said.

She called on all to strategise to solve the long-standing problems of needless and unproductive discrimination and thrive as valued citizens.

“I want you, all of us, in whatever demographic category to know that I will carry your voices forward. Together, we can make it happen.”