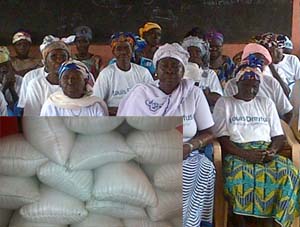 Some of the suspected witches, INSET: Bags of Cereals donated

INMATES of the Gambaga and Ngani Witches Camps in the Northern Region have given back to society what has been invested in them through an ongoing programme by Louis Dreyfus Foundation ? an international non-governmental organization which supports them in the cultivation of crops.

The suspected witches have donated large quantities of cereals to the Savelugu School for the Deaf in the Savelugu/Nanton District of the region, for the upkeep of the students.

The items included bags of maize, millet, soya beans, valued at several thousands of Ghana cedis, being part of the proceeds from the crops they had cultivated in their localities.

The said witches hoped the donation would go a long way to improving the nutritional needs of the students of the school.

Mr. Sampson Laar, Programmes Manager of Go Home Project, a non-governmental organization working to reunite the suspected witches, called on government and other stakeholders to contribute towards the upkeep of the less privileged and vulnerable in society.

He said the donation was to complement government?s efforts at providing the needs of the students as well as equip them with the necessary skills to contribute meaningfully to nation building.

The Manager of Louis Dreyfus Foundation, financiers of the project, in a speech read on his behalf by Mr. Emmanuel Wandat, commended officials of the Go Home Project for effectively impacting skills and knowledge on good agronomic practices to the inmates which had yielded good returns.

He disclosed the foundation?s resolve to empower the vulnerable through education, advocacy and provision of inputs as a means to achieving food sustainability and poverty reduction and promised more support for the two camps this year.

Mr. Wandat revealed that under the empowering vulnerable farmers? project in Ghana, 100 farmers, comprising 80 women and 20 men, were targeted and were engaged in the cultivation of 125 acres of maize, 50 acres of millet, 25 acres each of soya beans and beans for the poultry industry in the area.

Madam Gertrude Daasah, headmistress of the school who received the items, thanked the donors for their kind gesture and called on other NGOs and individuals to emulate the donors? kind gesture.

She promised to use the foodstuffs for the purpose for which they were donated.

Madam Daasah appealed to the government and other benevolent organizations to assist them with infrastructure and other logistics.

The school, which was established in 1978, currently has over 300 students but lacks major facilities that could enhance teaching and learning.

Pupils educated on how to sustain Ghana’s democracy