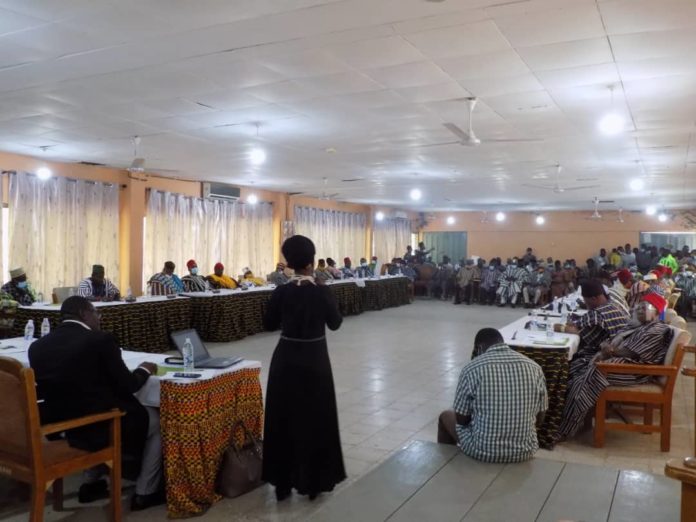 The Community Development and Advocacy Centre (CODAC-Ghana), a Non-Governmental Organization has engaged the Upper East Region House of Chiefs to advocate the inclusion of Queenmothers in traditional structures.

The NGO is implementing a project under its “Women’s Voice and Leadership (WVL) project Ghana”, to empower communities to strengthen the participation of Queen Mothers in traditional structures in some selected traditional areas in the region.

The two-year project has funding support from the Plan-Ghana NGO and the Canadian Government.
Its main aim is to make more beneficial, human rights of women and girls and the advancement of gender parity in the region and Ghana as a whole.

Speaking to the traditional authorities, Madam Limatu Afayak, the Project Officer, explained that as the custodians of the people, it was important to seek their support for the effective implementation of the new project.

She explained further that among the main objectives of the project was to increase awareness of community, traditional leaders and other stakeholders on the harmful cultural practices that hinder women and girls’ rights to participate at the family, community, District and regional level decision making.

The project would also strengthen capacities of communities, traditional, religious leaders, grassroots women’s organizations, networks and CBOs on the understanding of legislative instruments, conventions, gender equality and women’s right to empower them participate in decision making at traditional governance structures.

She said the project which was implemented in the Bongo and Bawku traditional areas in the region would also target stakeholders including; traditional councils, communities, decentralized departments, Media, Opinion leaders, and women networks.

It would “Enhance dialogue and advocacy initiatives on women’s participation in traditional councils and increase confidence of target groups to recognize their issues and have a voice that demands to be heard”.

It is also expected to build the capacity of Queenmothers to champion teenage pregnancies in their various communities and increase networking among target groups for collective voice in demanding for their rights and holding duty bearers accountable, Madam Afayak added.

She said women’s equal participation and representation in local decision-making processes was critical for prioritizing women’s practical needs and issues in local development agenda and for localizing the Sustainable Development Goals (SDGs).

Naba Baba Salifu Atamale Lemyaarum, the outgoing Vice president of the Region’s House of Chiefs, who is also the Paramount Chief of the Bongo Traditional Area lauded the effort of the NGO, for contributing towards the achievement of the SDGs.

He pledged the support and cooperation of the House for the successful implementation of the project and added that it would ensure critical issues affecting the growth and development of women and children were addressed.

He urged the NGO and its funding agency to scale up the initiative to cover all the traditional areas in the region to achieve maximum impact.