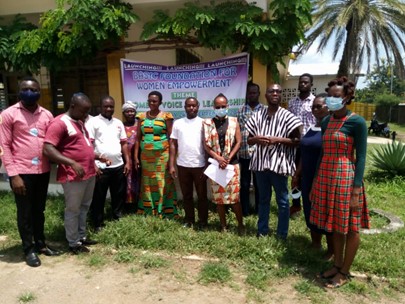 The project dubbed, ‘Women Voice and Leadership (WVL)’, which is to be implemented in selected communities in the Bolgatanga Municipality, aims at promoting social responsibility among stakeholders, enhancing quality of life among beneficiary communities and also maintaining self-help spirit among its members.

The five-year project also seeks to empower women to take up leadership roles, empower women economically and create and contribute to the attainment of the Sustainable Development Goals.

It is part of the Planned International Ghana advocacy project, and has financial support from Global Affairs Canada.
Addressing stakeholders at the launch, Ms Juliet Abajong, the Executive Director, BFWE, said the project would involve traditional authorities in its advocacy strategies to eliminate some of the socio-cultural norms that prevent the progress of women and would empower about 1,000 women.

She said although efforts had been made by various stakeholders to end gender based discrimination, the phenomenon was still prevalent and underscored intensive advocacy strategies to make a greater impact.

She said the project would undertake vigorous awareness creation on gender-based discrimination against women, promote women’s rights, build capacities of communities to eliminate stereotypical tags on women and girls and facilitate the mainstreaming of issues of women and girls into the development plans of the district Assemblies.

Ms Abajong said the BFWE was established in 2012 and got registered in 2016 and has since undertaken a number of activities aimed at improving economic empowerment women and girls in the Municipality.

“It has supported 10 women groups who are into rice parboiling, basket weaving, shea butter processing and pito brewing, with capacity building training and credit facilities to increase production, ensure quality of products as well as access markets for their products”.

She noted that the NGO worked with relevant stakeholders to create an environment without discrimination, where the vulnerable women and girls were economically empowered to live dignified lives and contribute to the attainment of the SDGs particularly goal five, that emphasised on gender equality.

The stakeholders included; Civil Society Organizations, state institutions, and traditional authorities, lauded the initiative of the BFWE and its sponsors and indicated that it would go a long way to cement the efforts made so far.

Madam Bridget Adongo Akasise, the Manager of the Sirigu Women Organization for Pottery and Arts (SWOPA), noted that supporting women economically was key to attaining gender equity and equality and therefore urged all stakeholders to support the project to succeed.

Madam Akasise who is also a gender activist urged the NGOs especially those involved in women empowerment to devise strategies to sustain beneficial projects after the sponsorship.

Ga Mantse Urges All To Use Homowo To Build Business Partnerships