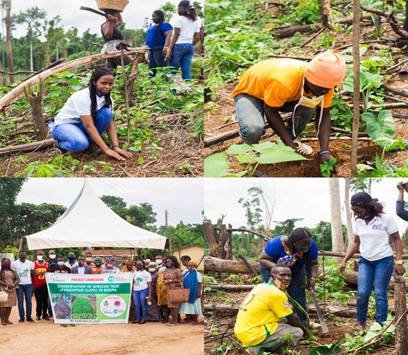 The Institute of Nature and Environmental Conservation (INEC), an NGO focusing on preservation and protection of plants, has launched a project to restock the country’s forests with African teak tree species.

The project, which is being carried out in collaboration with the Forestry Commission (FC), Forestry Research Institute of Ghana (FORIG) and the Kwame Nkrumah University of Science and Technology (KNUST) is to help prevent the species, locally known as ‘Krokodua’, from total extinction in the country’s forests.

The “conservation of African Teak (Pericopsis elata) in Ghana” project, which is being funded by the Fondation Franklinia, a Switzerland-based organization, would see the plantation of a total of 100,000 seedlings of African teak species in the Asenanyo Forest Reserve in the Nkawie forest district.

Mr. David Kwarteng, the Director of INEC, speaking at the launch of the project at Akotaa, a farming community in the Atwima Mponua District of Ashanti, said African teak tree was of very important value and its production should be embraced by all.

He said aside its commercial value as a timber species, it was also of very high medicinal value and served as protector of forest animals of all kinds.

Mr Kwarteng pointed out that African teak had been a target of unsustainable exploitation since the second half of the 20th century due to its incredible commercial and medicinal values as well as the use of its wood for fuel and others.

He said under the project, community members would be educated on practical knowledge on how the species were cultivated, its economic importance, the need to conserve the African teak and encourage commercial cultivation in the country.

Again, INEC would train the people in the forest fringe communities in snail, mushroom, grasscutter and bee keeping farming, to serve as a source of alternate livelihoods.

Mr Kwarteng said the overall goal of the project was to improve the conservation status, and ensure its long-term sustainability to guard against any susceptibility to future extinction.

He said the project would also involve the preservation of many other threatened tropical species such as Milicia excels (Odum), Triplochiton scleroxylon (Wawa), which were of great significant to Ghana.

Specifically, Mr Kwarteng said INEC would increase the population of the “Kokrodua” species through enrichment planting; provide much needed data on the species’ phenology and ecology to underpin conservation management decisions.

Again, the project would implement targeted conservation education and awareness on the plight and conservation status of the species and inspire farmer acceptability and positive behaviour change, ultimately culminating into the large scale cultivation of African Teak plantations.

Mr. Kwarteng mentioned that the natural regeneration of this species in the wild was nearly impossible because it had recalcitrant seeds that required pre-sowing treatment to break its dormancy.

She expressed displeasure about the tree’s exploitation in Ghana, which had pushed the Africa Teak to the brink of extinction, although national legislation prohibited its exploitation for both local and international timber markets.

Mr. John Osei Kofi, a farmer and Forest Guard, pledged that they were going to manage the tree crops well and prevent all activities that would lead to bush fires and land degradation.