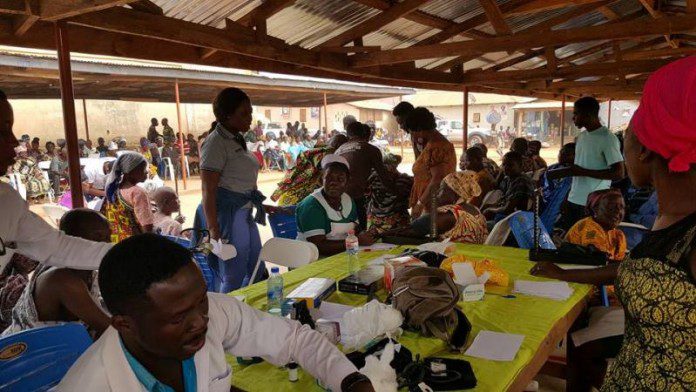 The exercise which was sponsored by IPMC, M & G Pharmaceuticals Limited, Health on Wheels, Pharmanova Limited, Radio One and Complex Farms; aimed at providing free quality health care, with much focus on the aged living within the vicinity. It was conducted by a medical team comprising, laboratory technicians, nurses, physicians and pharmacists drawn from the Hawa Memorial Saviour Hospital at Osiem, Health on Wheels, an NGO, as well as the Taifa Polyclinic.

Speaking to the Ghana News Agency, Dr Charles Dewhurst, a physician at the Polyclinic and a member of the medical team, said beneficiaries were taken through blood pressure checking, hypertension, hepatitis B, malaria, and diabetes tests.

He said they were offered free medication and educated on the importance of living healthy; while people who had severe cases were advised and further referred to nearby health facilities for further checkups.

Dr Dewhurst disclosed that a lot of people had high blood pressure in Ghana although most of them were not even aware, and advised the public to be much concerned about their lifestyles, adding “people should be active and check their diet”.

Ms Faustina Gyimah, the Founder and President of BlueCross Foundation, in an interview with the GNA, said the Foundation which was established in 2012, began with home care services for the aged, taking care of deprived senior citizens.

She said the exercise aimed at celebrating the Christmas with senior citizens within the various communities and also provide them with free healthcare.

She said among the Foundation’s objectives, was to create awareness on the need to give back to society by focusing on the aged, adding that “I believe that ageing is a process and definitely we will get there”.

Ms Gymah said the aged in Ghana and Africa as a whole were usually neglected, adding that old age comes with its own complications, with regards to health, finances or mostly family issues.

She explained that the motto of the Foundation is ‘giving priority to the aged’, and would at all times put smiles on their faces, to let them feel that they are also part of the society and needed as well.

She said the Foundation faced major challenges and appealed to churches, benevolent individuals and organisations, to support the activities of the Foundation, adding “we are targeting villages, and if you want us to come take care of people in your village, just call on us”.

Mr Samuel Ofosu Ampofo, former Minister of Local Government and Rural Development, told the GNA that he shared the vision of the NGO, in supporting the welfare of the aged in Ghana.

He pledged to support BlueCross’s laudable initiative, adding that it was appropriate to support the activities of the Foundation.

He urged Ghanaians especially corporate bodies to provide welfare services for the aged; describing the exercise as a payback time to what the society had given him.