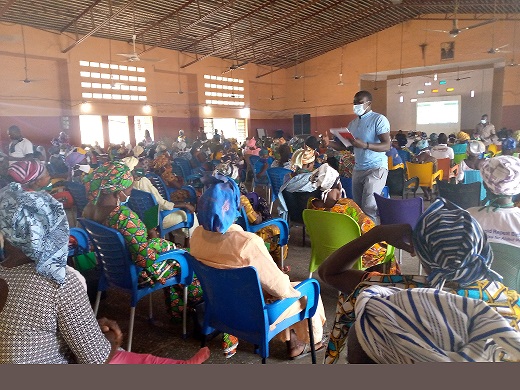 The SOCODEVI, a Canadian non-governmental organization (NGO) with its ‘PROCED’ project has partnered women rice par-boilers in the Upper East Region to form a Cooperative, to roll out an improved, but simple and cost effective technology for rice par-boiling.

The cooperative dubbed “BBN Cooperative” is made up of about 1,409 women rice par-boilers drawn from 59 Farmer-Based Organizations (FBOs) in three districts, Bolgatanga, Bawku and Navrongo (BBN) in the region.

Mr Raphael Asuure, the Cooperative Advisor for PROCED project, said this at a constitutional assembly of the BBN Cooperative, to elect its leadership and adopt by-laws that would govern and mark the birth of the Cooperative.

Mr Asuure said Cooperatives generally contributed to the improvement of living standards of women globally while providing essential infrastructure in areas that were being neglected by governments and investor- driven enterprises.

He said the PROCED project, which was expected to last for five years would partner the BBN Cooperative to focus its efforts on the sustainability of the economic operations of processing paddy rice and packaging it to be marketed in all cities across Ghana.

“We have built the capacity of the women on a simple technology to hygienically parboil the rice without the end product losing its nutritional value. So the Cooperative would provide the paddy rice, milling machines as well as the market component.”

“As we want the women to have that sense of ownership, we are requesting that they provide a seed capital,” he added.

Madam Esther Nsobilla, the women’s leader of a FBO in Yorigo community, said she had been par-boiling rice for the past four years and the Cooperative would be of help to her.

She said after undergoing series of training, she learnt how to efficiently par-boil rice without posing any form of threat to the environment as well as her health.

Madam Gilberta Akuka, a FBO leader in Sapeliga who has been parboiling rice for the past 11 years said the Cooperative would bridge the market gap and aid them to become economically viable.

She urged the public to patronize their products, saying that it was more nutritious as compared to other rice products.

The constitutional assembly attracted 177 women delegates from each of the 59 FBOs in the three districts.