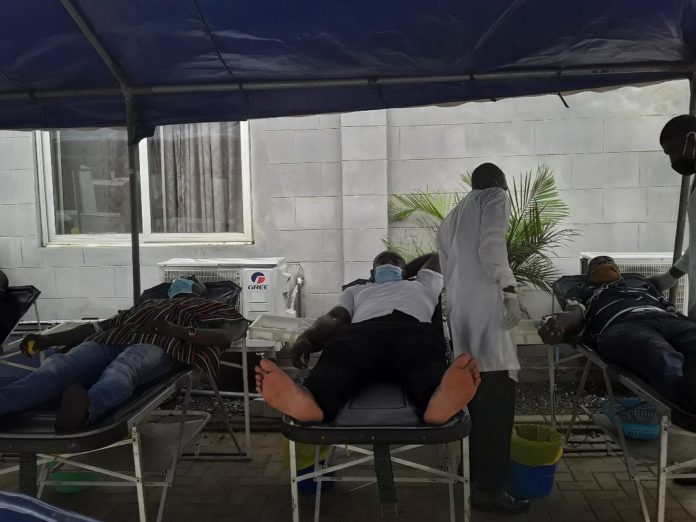 Society for Aids Africa (SAA), a Non-Governmental Organization (NGO) has organized a blood donation exercise for the 37 Military Blood Bank to increase its blood supply to save lives.

The Exercise was spearheaded by the Society for Aids Africa in collaboration with the Ghana Broadcasting Corporation and Ecobank.

Mr Luc Armand Bodea, Director Coordinator for SAA, said the purpose for the blood donation was to promote increment of blood supply to the Hospital through eligible donors.

He said his outfit realized people were not donating blood during the lockdown due to Covid 19 pandemic, which resulted to shortage of blood in various hospital blood banks.

He said the exercise was to provide free health screening to determine the health status of the donors, so it was imperative for eligible donors to donate.

“People are scared to donate blood because they do not know what they are putting there, someday your father, mother or relative may need blood and that could save their lives” Mr Bodea added.

He said blood donation does not destroy your health system, but rather offer you the opportunity to scrutinize your blood status such as HIV, Hepatizes B, Diabetes, among others and appealed to the public to donate to save more lives.

“We used to organize this activity every year on December 1 in Uganda on World Aids Day, but we decided to have it today and planning to do it every year,” Mr Bodea said.

He said his outfit planned to start with the 37 Military Hospital f and would continue with Korle bu Teaching Hospital next year.

Major Kwasi Boaheng, Head of Department for 37 Military Blood Bank, said the Hospital was at the fore front of saving lives, and it was an emergency accident center because of the nearby Motor Way, adding, blood should always be available.

He said the Hospital was a major referral center for most of the satellite hospitals around, which demands availability of blood for such unpleasant occurrences.

“One way that we ensure this was to ensure that such activities like the blood donation occur and we coordinate and make sure blood is used for stipulated purpose,” he said.

He said people were afraid to donate blood because of the COVID 19, adding, things were changing and called on other organizations to also promote blood donation campaigns.

He commended SAA for their initiative and called on the public especially the youth to partake in the exercise to save lives.

Mr Cosmos Ohene–Adjei, Director, Policy and Planning of the Ghana Aids Commission, commended SAA for the blood donation initiative and their approach to HIV, adding, the outfit organized conferences and invite experts and technocrat’s and researchers to deliberate on matters on HIV.

He said the exercise was an opportunity to know one’s HIV status because of the blood screening and commended SAA for the activities.

Mr Eddie Barnor a 64-year-old man who has donated 86 times, said he started donating blood since 1976 and has not been to the hospital for any health issue.

The donor said, he donates every four months, which gives him free medical screening to check his health status.

He said it was not painful donating blood as people speculated and appealed to the public to donate since there were a lot of benefit to derive from it.