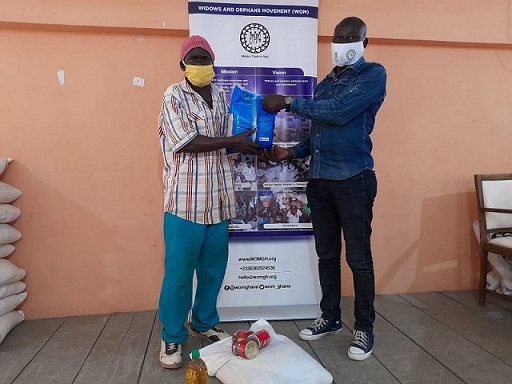 The Widows and Orphans Movement (WOM), a Non-Governmental Organization, has presented assorted food items to victims of the 2020 flood disaster in three districts of the Upper East Region.

The support, which included bags of rice, bags of maize, gallons of cooking oil, tin tomatoes and canned fish, were given to 270 affected persons in Bolgatanga Municipal, Builsa North Municipal and Pusiga District.

The donation was with the financial support of Oxfam Ghana.

In September 2020, the Upper East and North East Regions were hit by devastating flood caused by torrential rainfall and spillage of the Bagre Dam in Burkina Faso.

The situation led to the destruction of property, including houses, hectares of farms and loss of lives, among others.

Speaking at separate functions to distribute the food items, Mr Abang-Gos Ganinu, the Project Coordinator for Microcredit, WOM, noted that the support was part of the NGO’s corporate social responsibility.

Mr Abang-Gos, who is also the Masculinity and Assistant Project Officer at Oxfam Ghana, explained that the beneficiaries were selected based on the recommendation of the National Disaster Management Organization (NADMO).

The Project Coordinator said the support was to offer relief to vulnerable families to provide food, especially for their children.

He said in every humanitarian crisis such as flood, women, girls and children were usually the most affected and needed support from stakeholders to live dignified lives.

Mr David Amoabil Afoko, the Municipal Chief Executive (DCE) for Builsa North, lauded the efforts of WOM and Oxfam Ghana for helping to alleviate the suffering of the people.

The MCE called on other NGOs and philanthropists to extend a helping hand to the flood-affected people.

He admonished the beneficiaries not to sell the items but to use them to bring relief to their families.

The beneficiaries expressed gratitude to WOM and Oxfam Ghana for the gesture and pledged to use the food items to improve on their livelihoods.

Madam Comfort Akolgo, a beneficiary in the Bolgatanga Municipality, said due to the flood she and her family were finding life difficult and expressed the hope that the support would alleviate the suffering.

Mr Prosper Awini, a beneficiary from the Pusiga District, appealed to the government and other organizations to support them to rebuild their houses and support them to engage in dry season farming.