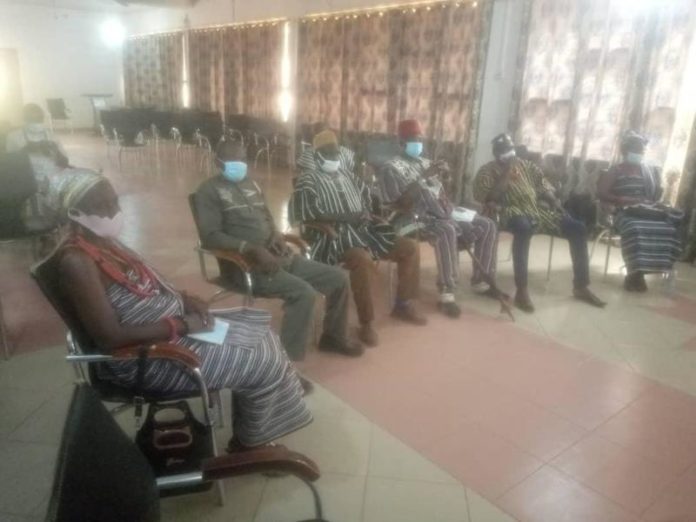 The Rural Initiatives for Self-Empowerment-Ghana (RISE-Ghana), a Non Governmental Organization has called on traditional authorities in the country to play critical roles to contribute to end Sexual and Gender Based Violence (SGBV).

It said authorities such as chiefs and queenmothers wielded much power and influence and could change some of the old-fashioned cultural practices that created room for SGBV to thrive.

This would create the enabling environment for women and girls, most especially to know, claim and exercise their rights to end the menace and contribute to the attainment of the Sustainable Development Goals (SDGs).

Mr Awal Ahmed Kariama, the Executive Director of RISE-Ghana, made the call at Navrongo in the Kassena-Nankana Municipality at a meeting of some Paramount Chiefs and Queenmothers in the Upper East Region to solicit their support in the fight against SGBV especially teenage pregnancy and child marriage.

The event was part of a four-year project dubbed, “ENOUGH! Empowering women, girls, boys and men to take positive action in ending sexual gender-based violence in Ghana, Liberia and Mali.”

It is being implemented in partnership with Oxfam Ghana and Women in Law and Development (WiLDAF) with funding support from the European Union (EU).

The Executive Director explained that SGBV particularly child marriage and teenage pregnancy continued was on the increase although efforts were being channeled at ending it, adding that currently research had shown that child marriage in the Upper East Region stood at 39 percent.

Mr Kariama explained that apart from domestic violence, which women suffered in various homes, a new trend that had emerged in the region was transactional sex, where young girls of tender age offered themselves for sex in exchange for money.

He expressed worry and called for collective action from all stakeholders to address phenomenon and secure a better future for and protect the rights of women and girls who are prone to SGBV.

He therefore called on traditional authorities to take positive actions by putting in place peer review mechanism and educating their subjects on the need to join hands to ending the SGBV to reduce teenage pregnancy, child marriage and school dropouts especially among girls leading to the achievement of SDGs especially goals three, four and five.
Navro Pio Denis Aniakwa Beliana Adda Asagpare II, the Paramount Chief of the Navrongo Traditional Area, who commended RISE-Ghana and its partners noted that parental irresponsibility was a major cause of such behaviours of children leading to SGBV.
He noted that some parents shirk their responsibilities especially the men and this led to children offering themselves in exchange for money which eventually resulted in abuses including teenage pregnancies and child marriages.
The Navro Pio underscored the need for traditional authorities to discipline irresponsible parents to serve as deterrent to others and modified some outmoded cultural practices to address modern challenges.

Pe Ayikode Zangwio Atoge IV, the Paramount Chief of Katiu Traditional Area noted that poverty was the root cause of SGBV especially teenage pregnancy and child marriage and advocated the construction of technical and technical training centres where girls who could not access high formal education could access skills training to earn a living.

“We need to create jobs meant specifically for only women, our nursing and midwifery professions should be made mainly for women and girls so that it will solve the issue of men taking up all the jobs in every sector,” he stressed.

Poknab Atebalie Azantinlow, the Paramount Queenmother of the Builsa Traditional Area advocated intensive education on and called her colleagues to act as ambassadors of sexual and reproductive rights to their various communities.