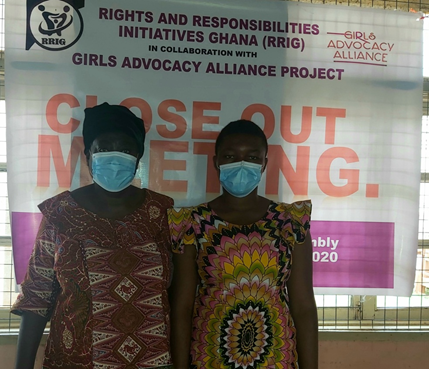 A five-year project which focused on advocating for the rights and welfare of women, children, and girls has ended with most of its objectives achieved.

The project which was dubbed “Girls Advocacy Alliance” (GAA) sought to address gender-based violence, commercial sex exploitation, and making girls independent by encouraging them to embrace technical and vocational education and training.

As indicated in a report presented by Madam Aba Oppong, Executive Director of the Rights and Responsibilities Initiative Ghana (RRIG), the facilitators of the project, teenage pregnancy, child marriages, and child labour, which were identified to be on the rise in the target areas at the commencement of the project, had reduced.

She told a close-out interface meeting of the GAA Project at Asante Bekwai that, NGOs involved in the project, were satisfied with the project’s outcomes.

The Defense for Children International Ghana (DCI-Ghana), Plan International Ghana, and NGO Coalition on the Rights of Child (GNCRC) were the implementing partners of the project in four regions in Ghana namely, Ashanti, Eastern, Northern, and Upper West.

It was funded by the Ministry of Foreign Affairs of the Netherlands.

The RRIG was an implementing partner of DCI-Ghana, in the execution of the project in the Asokore-Mampong, Bekwai, Kumasi Metropolis, and Obuasi all in the Ashanti Region.

Madam Oppong said the project helped in the formation of vibrant committees made up of parents, guardians, community leaders, the police, social welfare officers, traditional leaders, and assembly members to protect children in their communities.

Again, the project involved the use of local media and child advocacy groups to reach out to not less than 5,000 people from 10 communities in the Bekwai Municipality alone.

Madam Oppong noted that the involvement of these stakeholders in child protection helped address some of the issues affecting women and girls in the project communities.

Queendarling Elikem Tekpeh, a child advocate and project beneficiary, sharing her experience, indicated that she had been periodically engaging her peers, guiding them to discuss issues on child rights and protection.