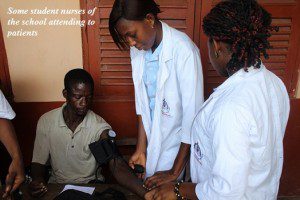 The National Health Insurance Authority (NHIA) has introduced a new programme dubbed ‘South South’ cooperation to attract more people, especially those who would register for the first time in the remote communities under the ongoing biometric registration in the Volta Region.

Under the new programme, three districts with common geographical boundaries would form groups to alternately release their biometric service mobile kits to one another during weekends to undertake mass registration and ensure that majority of the people, if not all, were registered.

The Volta Region Public Relations Officer of the NHIA, Mr. Charles Agbesi, who made this known at a press briefing in Ho explained that a similar programme – ‘the Volta BMS Keteke’, introduced earlier to increase membership registration and have access to healthcare had yielded positive results.

It has also proved to be one of the efficient ways of enabling more people to renew their cards as well as have access to healthcare. Mr. Agbesi continued that the new programme had become necessary in view of the challenges subscribers face in getting access to registration points in the region.

According to him, while some of the people have to travel long distances to the registration centers, others walked long distances to register. He stressed that the introduction of the new programme was geared towards those who would be registering for the first time and should do that comfortably in their communities.

He said the implementation of capitation as additional payment mechanism in the region was smooth and since July 2nd 2015, the implementation of the selection of Preferred Primary Healthcare Provider (PPP) started and as at the end of the third quarter of the year, – 221,653 subscribers have successfully selected their PPP out of a total active membership of 819,756 – representing 27.04 percent.

He noted that before the introduction of the biometric registration in the region – 324,547 subscribers had renewed their membership with the old application card.

Touching on premium mobilization, The Regional PRO disclosed that the region recorded 2,072,705 out of an annual target of 3,071,332 representing 67 percent as at the end of the third quarter and commended the staff of the scheme in the region for their hard work and dedication to duty particularly the staff of the NHIS at South Tongu, Ho, Hohoe and Keta who distinguished themselves in premium mobilization.

Mr. Agbesi noted that recently, concerns have been raised by service providers about the delay in reviewing the tariff by the NHIA as some threatened to withdraw their services saying the tariff being used currently came into effect in July 2014.

Accessibility to National Sports College to be increased