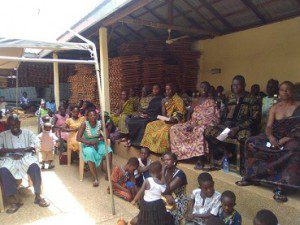 The National Health Insurance Authority (NHIA), in collaboration with the Bibiani-Anhwiaso-Bekwai District Office of the Authority, last weekend held a public durbar to educate and explain the importance of the Health Insurance Scheme to clients and subscribers in the District. The durbar, which is being held by the regional NHIA at every district where the scheme is operational, seeks to bring the policies and programmes of the Authority to the doorsteps of the thousands of people it serves.

Per the NHIA durbar policy, every District is to hold two durbars in a year, explaining the NHIS policy to clients.  That apart, the durbar was to explain to the stakeholders how the district office of the NHIS operates, as well as to get firsthand feedback of subscriber experiences at the various health facilities.

This, the NHIA intends to achieve through periodic interactions with subscribers and potential subscribers using all available mediums. The NHIA uses the community information systems, radio discussions and interviews, as well as community durbars, as platforms to reach out to subscribers of the programme.

In its programme of work, the district office intends to hold two of such community fora or durbars within the year under review, to spread the good news associated with the health insurance scheme.

The highly patronised event, which was held under the Chairmanship of the Omanhene of the Anhwiaso Traditional Area, Ogyeahoho Yaw Gyebi II, also saw in attendance the Regional Director of the NHIA, Mrs. Edna Gyau Baffour, the Regional ICT Coordinator, Ebenezer Owusu Boateng, and other divisional and sub chiefs drawn from the Sefwi-Anwiaso Bekwai jurisdiction.

Also in attendance were students from Queen’s High Secondary School, providers and staff from the district office, as well as media personnel. Key among the issues discussed at the durbar were the Biometric Membership System (BMS), Capitation under the NHIS, Drugs and Medicine List, and Tariffs among others.

After the addresses and speeches, there was an interactive session, where most questions posed by the subscribers of the programme were duly addressed by the regional HNIA Director and her team.
The questions ranged from renewal of health cards to the Biometric Membership System among others.

Addressing the durbar, Ogyeahoho Yaw Gyebi II expressed his appreciation and thanked the NHIA, Bibiani-Ahwiaso-Bekwai District, for bringing the NHIS BMS to their doorsteps.  He urged all gathered to ensure they register.

The Omanhene was enrolled onto the introduced BMS and presented with his card as evidence of how the new system works.  The other chiefs who accompanied the Omanhene were equally enrolled on the new BMS, receiving their cards instantly, and so were all the chiefs in attendance at the ceremony.

The Omanhene also used the opportunity to advise parents, especially, mothers, to ensure that they train their girl child to the highest educational level to take up leadership positions in society. In all, a period of one week was earmarked by the District NHIS to finish with the exercise as part of its special registration.

The District Manager, Mr. Kofi Baffour Asare, traced the evolution of the health insurance cards, and explained the importance of the new ID card and BMS when he took his turn.  Among other things, he stated that the BMS was issued instantly, provided data integrity, and would provide a source of capturing a client’s fingers to avoid duplication.

The Ag. Regional Director of the NHIA, Edna Gyau Baffour, in her remarks, re-echoed the authentication of clients’ fingerprints at provider sites during healthcare delivery.  This would ensure that only genuine claims are paid for, since authentication will generate a special claims check code.

She also urged all to help sustain the policy by avoiding facility or health shopping. The opportunity was also used to inform the general public to provide suggestions to the ongoing NHIA Review that was commissioned by the Health Minister.