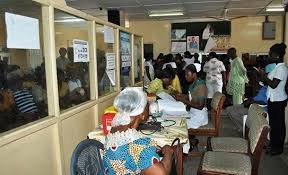 Dr. Samuel Annor, Chief Executive Officer of the National Health Insurance Authority (NHIA), has disclosed that the Scheme is broken to the extent that, it’s unable to pay service providers.

“The NHIA is at a stage where one will say it’s almost bankrupt, in that we have no reserves and we owe people so much. And this has come about because we have increased our membership so much but, we have not increased the funding appropriately.” He said this at a staff durbar at the head office on Friday to introduce three new Deputy Chief Executives for the NHIA.

The Executives includes Francis Owusu, in-charge of Finance and Investment, Lydia Baaba Selby, in-charge of Operations and Mrs. Yaa Pokuaa Baiden, in-charge of Human Resources and Administration. Dr. Samuel Annor elaborated that “the reserves we had at the close of 2009 is all gone because of increment in membership drive. So now there are no more reserves.”

He said the scheme’s inability to pay its service providers, is as a result of the depletion of the reserves. “If there were reserves, of course we would fall on it to pay the service providers. He is much concerned about the solidity of the scheme. “Apart from not having a drive, we owe people so much, thus, the Scheme certainly cannot be said to be in a very stable condition.

This was notwithstanding that the Health Minister Kwaku Agyemang-Manu said a payment plan had been reached on defraying the debt.” Dr. Annor noted.