Nigeria Bulk Electricity Trading Plc boss, Dr Marilyn Amobi became the latest Buhari administration official to be caught up in a travel expense scandal Friday with the release of a watchdog’s report that painted an 11-day trip to Gainesville, Florida as more of a sightseeing junket than official business for 6 members of the Nigerian National Assembly.

A whooping N65 Million Naira from public funds was alleged to have been spent by the Nigeria Bulk Electricity Trading Plc (NBET) for the trip, despite federal government’s restriction on foreign travels and trainings abroad.

A circular conveying the message, titled ‘Restrictions on Foreign Trainings and International Travels by Public Servants,’ was issued from the office of the head of the civil service of the federation to all ministries, departments and agencies of the federal government in 2015, putting embargo on foreign travels and international trainings.

“Public servants invited for foreign trainings/study tour, conferences by any organisation, government or other bilateral/multilateral organisation will be allowed to travel provided that no travel cost, estacode application or any other cost on government is involved, the circular stated.

In defiance of the federal government’s rule, the MD/CEO of NBET, Dr Marilyn Amobi, on the 28th of November 2017, gave a directive to spend $96,350 USD of public funds for Participation at the 43rd International training program on the utility regulation and strategy held in January 15-26 2018 in Gainsville, Florida, USA, by members of the National Assembly committees on power.

The whistleblower alleged that the national assembly members did not attend the event, describing it as a shocking waste of taxpayers money. 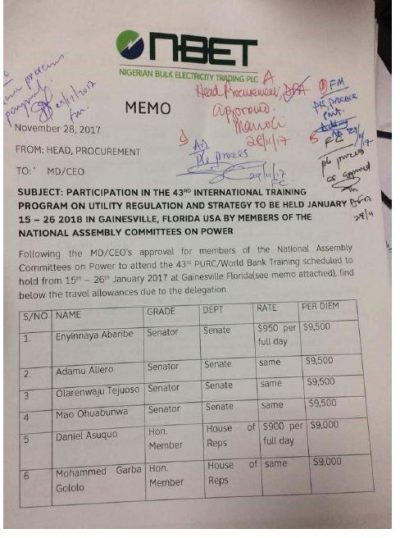 Independent investigation by Per Second News revealed that an additional $7,200 was charged by the organizers of the training for each participant, revealing an additional N15 million tab by the Nigeria Bulk Electricity Trading Plc. The watchdog alleged that the NBET had desperately tried to withhold the information, claiming making travel expenses public would create an “excessive administrative burden”.

Group photo below of participants at the training obtained by Per Second News from Florida did not show the senators from Nigeria.

In another fresh allegation the watchdog group accused the NBET boss of another N40 million trip bonanza for some government officials.

“Our recent investigation has revealed how some staff of the Office of Accountant General of the Federation, OAGF, have coerced the MD/CEO of NBET to sponsor them on foreign training to Denmark where about forty million was expended, the group told Per Second News.

The group also alleged that some of the OAGF staff did not attend the training but enjoyed the financial benefits paid into their various bank accounts.

The group allege that some staff of the Office of Accountant General of the Federation has been embedded into the payroll of NBET on monthly basis in addition to their monthly salaries from OAGF, in an audacious move without the approval of neither the Minister of Power, Works and Housing nor the Head of Service of the Federation.

The head media for NBET, Henrietta Ighomrore, did not respond to multiple inquiries seeking comment.