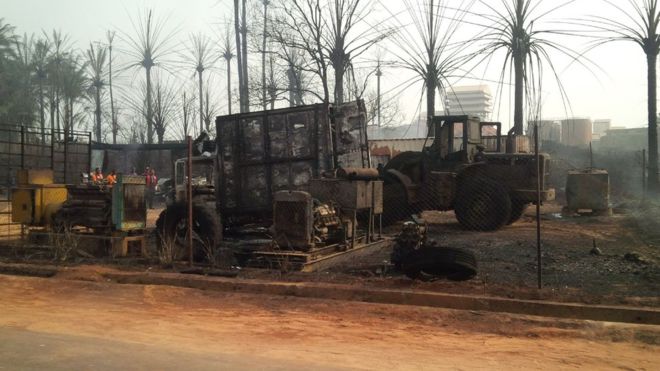 The fire raged for more than five hours before being extinguished.

Witnesses said the bodies of workers and customers at the depot in Nnewi in Anambra State had been burned beyond recognition.

Many customers had gone to the plant to fill up their gas bottles to cook meals on Christmas Day.

“My heart and prayers go out to these grieving families at this difficult and painful moment,” President Muhammadu Buhari said in a statement.

The dead and injured were taken to the Nnamdi Azikiwe University Teaching Hospital in Nnewi, which has a predominantly Christian community.

Staff inside the plant are reported to have been trapped.

“The fire burned beyond recognition all the workers who were inside that depot at that time and also all the customers inside that depot,” Chukwuemerie Uduchukwu, who went to the scene, told the BBC.

The ferocity of the blast also damaged houses in the surrounding area.

Police spokesman Ali Okechukwu said there had been a “huge inferno”.

A witness told the Vanguard newspaper that the blast was triggered when a truck began discharging cooking gas without waiting for the mandatory cooling time.

Passers-by were also caught up in the explosion, the newspaper reported.

Witnesses described a huge fire with acrid black smoke hanging over the scene of the disaster.

How Buhari Is Already Rigging The 2023 Elections