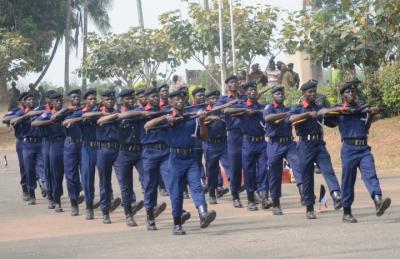 Unidentified gunmen in the wee hours of Monday shot and killed an Assistant Commandant of the Nigeria Security and Civil Defense Corps (NSCDC) in Benue state, Abeeka Abeeka.

The killing of the officer took place at Akile village, Tyo Mu along Makurdi- Gboko road at about 4am on Monday outside the officer’s house, when the youths shot to death the officer and took to their heels.

The late officer was woken up following the alarm raised by neighbours that some people were coming to attack the village.

It was gathered that as soon as Abeeka stepped out of his house, one of the gunmen opened fire and killed him.

Tyo Mu community had witnessed a series of clashes in recent times between the indigenes and settlers over land dispute.

It could be recalled that for some time now, villagers in the area have been engaged in rivalry over land matters as well as contention over rights over economic sites in the area.

Abeeka, an assistant commandant of the corps, was a dedicated and energetic person, he would be missed.

This is a sad incident and very unfortunate coming at a time the NSCDC still mourning the death of Inspector Joseph Ochogwu, an Idoma man from Benue South senatorial zone who was murdered some days back by gunmen suspected to be herdsmen in the state.

“We have commenced full scale investigation into the matter to ascertain those behind the dastardly act, while the manhunt of the fleeing bandits was ongoing with a view to bringing the perpetrators to justice.