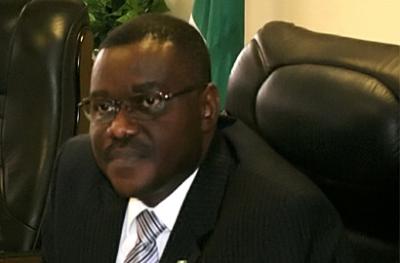 After several specoulations regarding a possible outbreak of Ebola disease in the country, one dead resulting from the virus occurred  Friday in Lagos, compelling the Federal Government to embark on frantic efforts to calm the nerves of Nigerians.

The victim was said to be travelling from Monrovia, Liberia to Nigeria with Asky Airline via Lome to Lagos. According to officials,  “the passenger,  a 40 year old man” who showed symptoms of “fever,  vomiting and diarrhea on arrival at the airport” was “quickly isolated and transported straight to the hospitals” by officials of Port Health Service of the Federal Ministry of Health.

Addressing journalists Friday in Abuja,  the Minister of Health,  Prof.  Onyebuchi Chukwu alongside the Minister of Information, Labaran Maku said the “patient was subjected to thorough medical evaluation where laboratory investigations were also carried out.”

Meanwhile, the Minister has urged all Nigerians not to panic, while pleading that citizens should be at alert and be conscious of their hygiene.

The Minister also said that contacts have been made with the airline and passengers that travelled with the victim for proper monitoring to avoid spread of the virus.

The Ministry has also made phone numbers available for the public to call in case of emergencies.

Ebola virus currently has no vaccine. The deadly virus which can claim a life within two days if contracted, is believed to be transmitted by bats and primates like monkeys and chimpanzees.