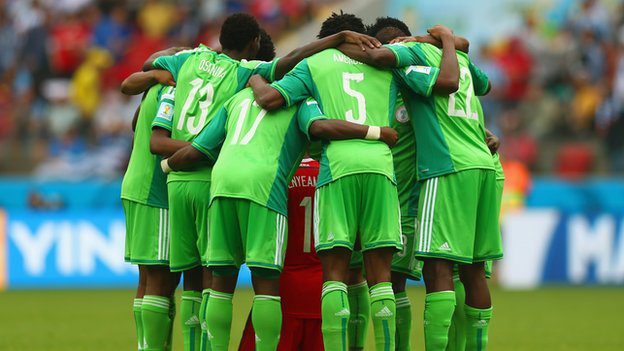 The African football governing body, Caf, has slammed a $5 000 fine on Nigeria for pitch invasion during their 2017 Africa Cup of Nations qualifier against Chad.

The match against Chad took place at the Ahmadu Bello Stadium in Kaduna on June 13.

The Caf disciplinary board in its decision taken on September 20 and announced this week revealed that the offence committed during the Afcon qualifier is ?pitch invasion when Nigeria scored?.

The former African champions are currently second in Group G
of the Afcon qualification, two points fewer than leaders Egypt, who have taken maximum points from games against Tanzania and Chad.

The two nations meet on March 23, 2016 for the first time in the group, with the Nigerians playing the hosts. Four days later, Nigeria will travel to Egypt in the return clash that could determine who stays atop of the group.

The Nigeria Football Federation (NFF) is yet to pick a venue for the March 23 game against the Pharaohs of Egypt as the Eagles have shuttled their home games among UJ Esuene Stadium, the Akwa Ibom Stadium, Ahmadu Bello Stadium and the Adokiye Amiesimaka Stadium in recent months.

The last time Caf fined Nigeria in an Afcon game was in February 2010, when they played co-hosts Ghana for that year?s edition of the African tournament.

Caf fined Nigeria $10,000 in 2010 for a pitch invasion by fans, who thought the Super Eagles had won by the golden goal rule against Senegal after Julius Aghahowa scored in extra time in a quarterfinal match.

The African football body later reduce the fine on Nigeria by half.