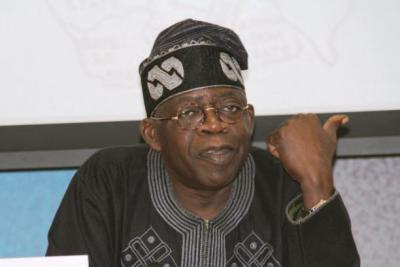 ?Segun Adio,
Group News Editor
National Leader of All Progressives Congress (APC), Asiwaju Bola Ti?nubu, on Tuesday alleged that his private residence on Bourdilllon Road, Ikoyi Lagos had been un?der surveillance for three straight days by battle-ready and helmet-wearing soldiers.
But in a swift reaction, the military authorities described the allegation as false.
Tinubu levelled the al?legation in a statement issued by his Special Ad?viser on Media, Sunday Dare, adding that the sol?diers numbered close to 30 and rode in three patrol vans and an army trucks stationed close to the en?trance of his house.
The statement reads in part: ?The soldiers were first noticed on Sunday a few minutes to 11pm in an army truck. They stationed about 500 me?ters away from Tinubu?s gate. Later they moved close to his gate as if mak?ing efforts to enter. The stern looking soldiers were around for hours on Sunday and returned on Monday to continue their surveillance. Monday night about 10.45pm, they returned to the residence in two army vans and were there throughout the night. Some of the sol?diers discharged from the van and walked back and forth in front of the house and around the house in what is clearly some cas?ing effort.
?This morning, Tues?day, two vans from the army were stationed on both sides of the house along Bourdillon road their missions shrouded in secrecy?.
Reacting, Tinubu in the statement said he will not be intimidated by this show of strength, intimi?dation and possible ha?rassment.
?I remain resolute in my advocacy and support for the rule of law. Jonathan?s government has through the service chiefs staged a coup against Nigerians and the Constitution and now wants to silence his critics. I will not be muz?zled through the barrel of the gun. The guns and bul?lets they should use to de?feat Boko Haram are now being turned against the opposition and innocent Nigerians,? he said.
Meanwhile, the mili?tary authorities on Tues?day described the allega?tion as false.
The General Officer Commanding (GOC) 81 Division, Major General Tamubomiebi Dibi told Daily Times on phone that there was nothing like that and that it was all a ruse.
He said that soldiers on the Lagos State Se?curity initiative, the OP Mesa and Quick Response Group (QRG), had always been on patrol in the Ikoyi and Victoria Island area but no soldier or soldiers had been deployed specifi?cally to keep surveillance on the APC leader.
General Dibi asked: ?Why should we deploy soldiers to monitor Sena?tor Tinubu? There was no need for it as he had not done anything wrong.?
Dibi said that the rela?tive peace being enjoyed by Lagos residents was due to the patrols being conducted by operatives of the military attached to the QRG and OP Mesa, but emphasized that soldiers were not deployed to take over, surround or mount surveillance on Ti?nubu?s house.?
Earlier, the Assistant Director Army Public Relations of 81 Division, Colonel Mustapha Anka had also denied knowl?edge of any such incident.
Colonel Anka said he quickly conducted intel?ligence to understand the true situation, add?ing that ?an officer was sent to Bourdillon to get details of the situation. The officer came back to say that he could not find any soldier in the area but pockets of policemen apparently deployed to the residence of the APC leader.?