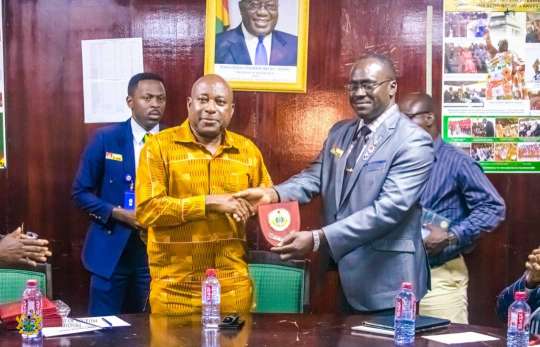 High ranking senior military officers from the Nigeria Defence Staff College, led by Air Commodore Kehinde Adebayo, on Friday called on the Tourism Minister to explore the tourism prospects in Ghana, as part of their study tour.

The 45-member team was received by the Deputy Minister of Tourism, Arts and Culture, Dr Ziblim Iddi Barri, in Accra.

Air Commodore Adebayo said his team’s study tour was part of the on-going assessment for Senior Military Officers from the College prior to passing-out.

He said they would also explore the tourism prospects in Ghana, given the significant successes chalked by the ‘Year of Return’ programme the Ministry organised.

“The Year of Return event was a major success for Ghana, and therefore, there is the need for the Nigeria Government to draw useful lessons from it, in its quest to organise subsequent programmes of that nature,” he said.

Air Commodore Adebaye said Ghana’s Government had shown good leadership through innovative interventions aimed at turning the economic fortunes of the tourism sector through the Year of Return and other polices.

He commended the Minister and her able team in making significant strides in tourism.

Dr Barri, on his part, commended the delegation for choosing Ghana as the country for their study tour, particularly their interest in the tourism sector.

He said Ghana and Nigeria shared a lot in terms of political history and, therefore, both countries must endeavour to sustain the relations for their sociocultural and economic benefits.

Dr Barri said Ghana could not achieve its tourism development agenda unless it was linked to the rest of the African countries and that the Government had positioned tourism to be the centre stage of its economic transformational agenda.

He said government had taken another bold step to launch the “Beyond the Year of Return,” which anchors on investment and trade facilitation for the Diaspora, citizenship acquisition and establishment of a Diasporas Village yet to be out-doored.