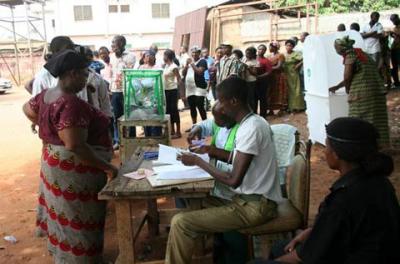 Nigeria’s main opposition party has urged citizens of the West African country to go to the polls on Saturday peacefully, but resolutely. Spokesperson for the All Progressives Congress (APC) Lai Mohammed made the call at a press conference in Lagos, Nigeria’s economic hub, on Wednesday, three days to the presidential election in the country.
Mohammed also called on all members and supporters of the party to be peaceful before, during and after the elections.
“We say no to violence of any kind, and we are supremely confident that in the end, the will of the people will prevail,” he said.
The opposition mouthpiece urged voters to stay behind to defend their votes as the election body chairman, Attahiru Jega, had said it was lawful to wait to watch and ensure that their votes are counted.
He also urged the people to be vigilant in the days ahead.
According to him, the state of youth unemployment, insecurity, state of infrastructure, among others were issues that would shape the elections.
Also, the party’s presidential candidate, Muhammadu Buhari, has called on his party’s supporters to shun violence during and after the elections. Enditem