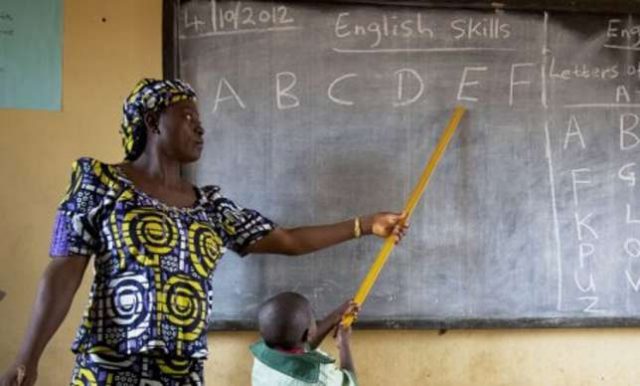 The Nigerian Union of Teachers has rejected the handover of payment of primary schools teachers’ salaries to the local government councils.
It said the union’s opposition to the planned handover of payment of teachers’ salaries to local government administration is hinged on the Supreme Court decision, which granted payment of the salary of primary school teachers to states.
According to the News Agency of Nigeria ( NAN), Mr Simon Ozo, Ebonyi NUT Chairman, on Monday, stressed the need for the Federal Government to respect the 2012 Supreme Court’s judgment on the responsibility of state and federal governments to primary school education in Nigeria.
“The plan if allowed to sail through will pose serious threat to the foundation of education in Nigeria, and every genuine and bold attempt must be made by education loving Nigerians to rescue and save primary education from imminent collapse.
“We do not want the payment of salaries of our primary school teachers to be joined in the autonomy that will be granted the local government.
“The Supreme Court made it very clear that the management of primary school is in the hands of state governments and we stand on this verdict.
“We don’t know why anybody in his right thinking senses will want primary school teachers’ salaries to be joined with local government areas.
“We know the excesses of our local government chairmen and their administration, they will not remember the teachers, they will prefer to marry new wives, build new houses, buy new cars and take care of their girl friends rather than pay our salaries.
“This is why the union is opposed to the plan and as teachers we say, have your autonomy, but allow our salaries to come from state governments or let it go through Universal Basic Education Commission direct so that we receive our salaries promptly,” Ozo added.
He said that the protest which took place on June 22 in Ebonyi, also took place in other parts of the country.
The President, the Nigeria Union of Local Government Employees Ebonyi Chapter, Mr Leo Nkah, who spoke on the issue, supported the NUT’s position.
Nkah said that the teachers only want to secure their future, stressing that they were not against local government autonomy.
Nkah, who is also the Acting Chairman, Nigeria Labour Congress, Ebonyi Chapter, noted that the local government councils were saddled with the payment of teachers’ salaries.
He stressed that it should not be so, adding that the local government council were required ` to participate’ in the payment of teachers’ salaries.
Nkah said that any constitutional arrangement should ensure that this participatory clause is respected.
Send your news stories to newsghana101@gmail.com and via WhatsApp on +233 244244807 Follow News Ghana on Google News