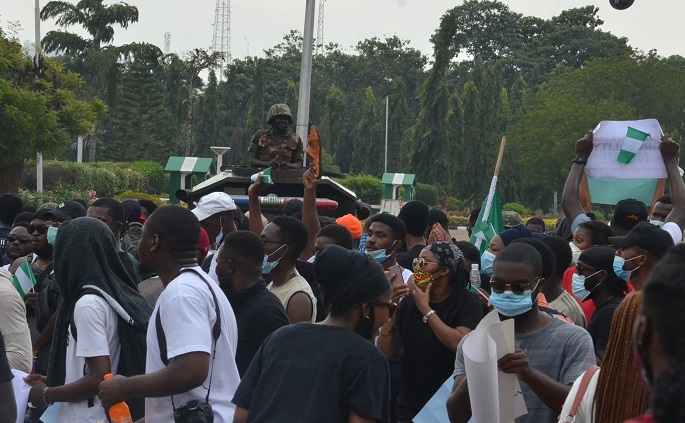 Protesters peacefully keeping vigil in objection to police brutality across Nigeria on Friday held a night of remembrance for those whose lives were allegedly cut short by a defunct special unit of the police.

Michael Jackson’s 1991 song “Heal The World” reverberated at a protest ground in Lagos, Nigeria’s center of commerce, as the protesters held flashlights and candles — with tears streaming down the faces of many — in honor and to keep alive the memories of the victims of police brutality earlier reported in some parts of the country.

It has been 11 days since protesters, mainly the youths, took to the streets in major cities across Nigeria, demanding justice for those reportedly killed or maimed by the State Anti-Robbery Squad (SARS), a unit created by the police with noble anti-robbery intentions.

The ongoing protest, so far noted to be the largest in Nigeria since the country returned to democratic rule in 1999, is mainly calling on the government to reform the police.

The capital, Abuja, and Lagos, the economic hub, witnessed increasing protests by citizens and celebrities who raised their voices on high decibel against cases of police misconduct like torture, ill-treatment, and extrajudicial execution, mostly by the SARS.

In Abuja, protesters gathered at the Unity Fountain at the Maitama area and mourned those allegedly killed by the police with a candlelight procession. They took turns to narrate the near-death experiences some of them had with murderous cops.

Tears flowed freely when relatives of those earlier killed also took turns to narrate the last moments of the deceased.

“With this peaceful protest, our message is clear: it’s time to end the needless killings by those who have the responsibility to protect us,” said Femi Balogun, a protester whose best friend was allegedly killed by a trigger-happy policeman over a year ago.

“We’re here tonight to demand justice for everyone whose life was cut short the most brutal way by the police. And we also demand an extensive police reform, so that issues like this can be solved,” Balogun said.

At some of the protest grounds across Nigeria, the names of the victims were reeled out. Some had portraits of the deceased on display.

Protesters blocked the main road linking the Nnamdi Azikwe International Airport in Abuja on Friday, with traffic on standstill. Early Saturday, the Abuja-Keffi highway was also blocked by the protesters.

In Lagos, the nature of the protests has largely turned out to be carnival-like, with disc jockeys performing all the time. The protesters said they would not leave the streets until the authorities convincingly commence the process to reform the police.

So far, the authorities have acceded to some of the protesters’ demands. On Oct. 11, the police authorities disbanded the SARS across police commands in the country, saying the scrapping of that police unit was in response to the yearnings of Nigerians.

Nigerian President Muhammadu Buhari on Oct. 12 vowed to reform the police amid the protests, saying the disbanding of that special crime-fighting unit was the first step to “extensive police reforms” by the government.

“I will like to use this opportunity to say a word on the recent genuine concerns and agitations by Nigerians about the excessive use of force and in some cases extra-judicial killings and wrongful conduct of the men of the Nigerian Police Force,” the president said, directing that all those responsible for the misconduct or wrongful acts within the police be brought to justice.

“The disbanding of SARS is only the first step in our commitment to extensive police reforms in order to ensure that the primary duty of the police and other law enforcement agencies remains the protection of lives and livelihood of our people,” Buhari said.

According to him, the few bad eggs should not be allowed to tarnish the image and reputation of the force.

Appealing to protesters to exercise caution amid the protests late Friday, Vice President Yemi Osinbajo apologized to Nigerians for the slow response of the government to the issues raised.

“Dear Nigerians, I know that many of you are angry, and understandably so. We could’ve moved faster and for this we are sorry,” he wrote via his verified Twitter handle.

“I fully understand how many young people feel. Many feel that we have been too silent and have simply not done enough. These feelings of frustration are justified,” he said, noting there are far too many people who have been brutalised at the hands of the police.

The government, he, however, added, had been following the protests over the past week and working to solve the problems.

“We understand that you want to see action from us and I’m here to tell you that work is ongoing… With Mr. President’s approval, SARS has been completely disestablished, and none of its former members will feature in any police tactical units,” Osinbajo added.